Car Sales Expected to Falter in February, With Chrysler and Ford Hit the Hardest

According to a major car industry research firm, U.S. new vehicle sales will be 4% lower in February, another sign the American car market peaked in 2016 and 2017. Total sales are expected to reach 1,275,000. Fiat Chrysler Automobiles N.V. (NYSE: FCAU) and Ford Motor Co. (NYSE: F) are expected to post the largest drops.

Ford February sales are expected to fall 6%, based on the research from Kelley Blue Book (KBB), to 195,000. Fiat Chrysler sales are expected to drop 7.9% to 155,000. Each company has suffered because of its product mix. Manufacturers with a large number of sedan nameplates have been hurt as the buying public has gravitated to sport utility vehicles and crossovers. Neither company has a lineup to match this trend.

Among the niche car companies, Hyundai Kia sales are expected to fall only 0.7% to 95,000. Volkswagen sales should show that it is slowly rebounding from the diesel engine fraud scandal. Its sales are expected to be up 5.8% to 45,000. Subaru, which has been one of the fastest growing car brands in the past two years, is expected to have sales of 45,000, down 1.1%.

Commenting on the month as a whole, Charlie Chesbrough, senior economist for Cox Automotive, said:

The sales pace slowed in January, and our expectation is that February is going to be even weaker. Sales should fall about 4 percent on a year-over-year basis, resulting in the weakest February sales period since 2015. February has typically been in the bottom three months of the year for vehicle sales, as much of the market waits for the spring selling season. The number of selling days in the month is unchanged from last year, so the expected decline is not calendar driven. There is some indication that Winter Olympics can influence weaker performance relative to a “normal” February. The record for February was hit in 2000, when sales reached 1.5 million for the month and an 18.9 million SAAR. Achieving that level again this year seems highly unlikely.

Success in the U.S. car industry has come down to a fight for market share. The rising tide that lifted all ships is gone. 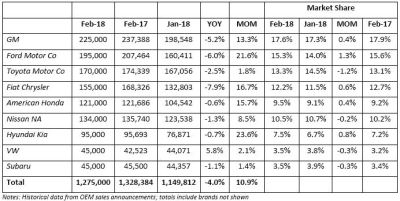