The global market for new cars in 2018 settled right around 95.16 million, slightly below the prior-year total but about 0.8% higher than projected 2019 sales of 94.4 million new cars. The market struggled last year in four of the world’s top five car markets, largely as a result of the U.S.-China trade war.

The 2019 estimate was released Tuesday by Taiwan-based research firm TrendForce. The ongoing trade conflict between China and the United States continues to drag on the car market. Sales in the United States and China dipped slightly last year, while markets in Europe and Japan held steady. Only the Indian market rose, as the country’s economy continues to swell.

TrendForce analyst Caroline Chen points out the close relationship between a country’s economy and its market for new cars. When consumers get pessimistic about jobs, wage growth and the country’s overall economy, those doubts translate into “deferred consumption” of new car buying.

TrendForce also notes: “Car makers are proactively carrying out development of electric vehicles and speeding up rollouts of new car models in anticipation of global energy-saving and emission-reducing trends, as well as the policies implemented by various countries.”

Chen expects policy decisions to play a major role in electric vehicle development in 2019. As she puts in the press release announcing the company’s full report, “China and the US are both hoping to push towards free market competition for electric vehicles, and have begun to reduce subsidies and raise the bar. Though these acts are sure to cause some disturbances in the car market, it will exert a positive influence and help clear out the riffraff.”

24/7 Wall St.
How People Buying Cars Has Changed Over the Years 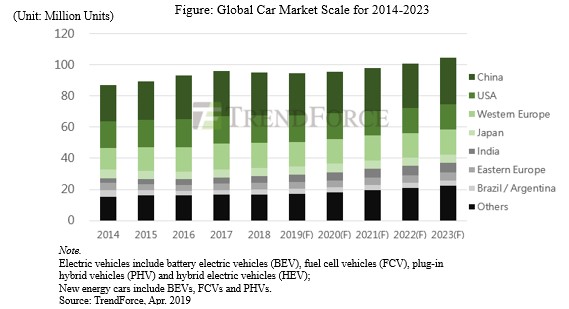