Last week’s launch of the Ford Motor Co. (NYSE: F) F-150 Lightning not only got a PR boost from President Biden’s turn around the test track. At the launch, Ford said it would accept $100 refundable deposits for interested buyers. After just two days, the company said it had taken more than 44,500 reservations.

Customers who pay the deposit will be able to order their pickups this fall for delivery next spring. The basic F-150 Lightning carries a manufacturer’s suggested retail price of $41,669, while the XLT version starts at $56.669 and the Lariat and Platinum could cost up to $90,000, fully loaded. If every customer ordered just the basic version, Ford’s revenue from selling 44,500 of the Lightning trucks would total about $1.87 billion.

According to a crowd-sourced tracker based in Canada, as of mid-April, Tesla Inc.’s (NASDAQ: TSLA) Cybertruck had received more than 1 million net reservations. According to Drive Tesla Canada, at an average price of around $58,000, the total value of the deposits exceeds $124 billion through 2026. Tesla began taking reservations for the Cybertruck in November 2019.

A consumer protection panel in Norway has found the company guilty and ordered Tesla to pay $16,000 each to owners of certain vehicles whose charging speeds and battery capacities were throttled by Tesla. According to a report at Electrek, the first reports of a throttling problem came in 2019 following a Tesla software upgrade. One owner told Electrek, “My 2014 Model S 85 was getting Rated Range of 247 miles until May 13. Now after the next update, it continued to drop to now 217 miles. This is an 11% drop in 5 weeks.”

According to Norwegian website Nettavisen, Tesla did not appear before the conciliation board. The verdict was announced last Monday and Tesla has been ordered to pay by May 31 or appeal the decision by June 17. More than 30 Tesla owners were included in the case. In early March, 75 Danish Tesla owners sued the company over a doubling of the time it now takes to charge their vehicles.

It’s not only Ford nipping at Tesla’s heels with all-electric versions of the company’s iconic Mustang and now F-150 pickup. Volkswagen has surged past Tesla in Germany. According to Jose Pontes at CleanTechnica, of the top 20 EVs in the German market, VW holds the top two spots with its e-Up! and ID.3 models. Sales of the two vehicles for the first four months of 2021 totaled more than 18,000, while the Tesla Model 3 sold just 6,513 over the same period.

The story is much the same in the rest of Europe. Charles Morris at Evannex notes that IHS Markit reported that VW had the highest share of the European EV market (24%), followed by Renault (16%) and Tesla (8.6%). The following chart from CleanTechnica shows that Tesla ranks fifth in sales in a group of 10 European countries. 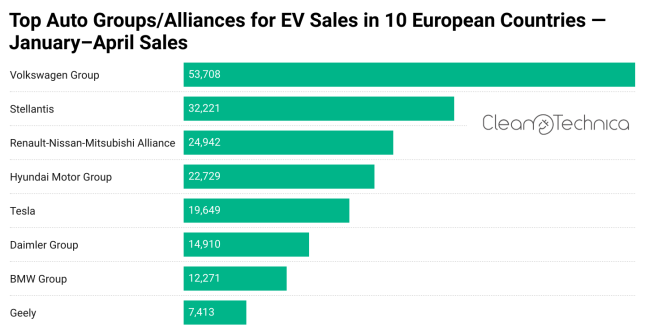