In EV News: No Plaid+ From Tesla, Self-Driving Cars

Just last week, a new Tesla Inc. (NASDAQ: TSLA) Model S Plaid ran a record-breaking time of 9.247 seconds, reaching a top speed of 152 mph. The car is being launched later this week, and a follow-on version, the Model S Plaid+, was supposed to be ready for delivery by the middle of next year.

Plaid+ is canceled. No need, as Plaid is just so good.

In a statement to Electrek, Musk clarified the reason for the cancellation:

What we are seeing is that once you have a range above 400 miles, more range doesn’t really matter. There are essentially zero trips above 400 miles where the driver doesn’t need to stop for restroom, food, coffee, etc. anyway.

That may be Musk’s point of view, but it is not one likely shared by Lucid Motors and Churchill Capital Corp IV (NYSE: CCIV). Churchill and Lucid have agreed to a reverse merger that will take Lucid public later this year. The deal, announced in February, would value Lucid at around $24 billion and generate $4.4 billion in net proceeds to the EV maker.

The company’s first vehicle, the Lucid Air, is said to have a single-charge range of around 520 miles.

While Musk is likely correct that 400 miles is plenty of range in most circumstances, Electrek notes other considerations like cold climates that reduce battery range and the “psychological barrier” of a 500-mile range.

Over the weekend, the Wall Street Journal published a story on fully autonomous vehicles suggesting that a car without a steering wheel may never make it to a showroom floor. Elon Musk’s prediction that an autonomous Tesla robotaxi would be available by 2020 has not proven to be true. Recently, Musk changed his tune.

A major part of real-world AI has to be solved to make unsupervised, generalized full self-driving work, as the entire road system is designed for biological neural nets with optical imagers

In order for a fully autonomous vehicle to drive like a human, Wall Street Journal writer Christopher Mims says, “researchers have to create AI [artificial intelligence] on par with [a human].” No one knows how to do that.

What good technologists do know how to do is manage expectations by showing off self-driving vehicles in limited test environments where weather conditions are ideal. Then the definition of “autonomous” gets a rewrite, too.

Mims cites Mary Cummings, professor of computer science and director of the Humans and Autonomy Lab at Duke University, who has created a reasoning taxonomy based on the behaviors needed to learn, whether human or machine. The lowest level is skill-based (keep the car in its lane), followed by rules-based (stop at a Stop sign), knowledge-based (is a partially covered Stop sign still a Stop sign?), and expert-based (how to put all of a human’s knowledge and experience to use to escape a tricky situation. 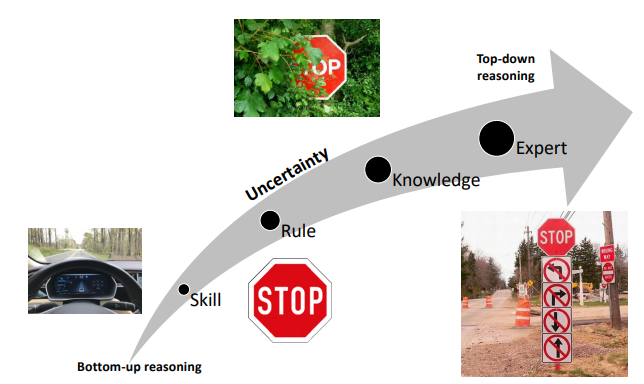