Last July, Loup Ventures analyst Gene Munster wrote that he did not expect automakers like Ford, GM or Chrysler to catch up with Tesla Inc. (NASDAQ: TSLA) in the battle for market share among EV makers. He said that the price-performance gap between Tesla and the traditional carmakers will not only not close, it will widen because they won’t be producing as many EVs as they will need to in order to meet rising demand.

According to Teslarati’s report, Tuopu commented on recent public relations problems related to “Company A” (a poorly disguised nom de guerre for Tesla):

What I want to say is that in the process of cooperating with customers we deeply realize that all things done by Company A are correct, including product positioning, research and development manufacturing, supplier management, quality, marketing, etc are all very correct. Other car companies have a gap of at least 5 years. At noon, we just saw a 240% increase in European sales of Company A in May, and a substantial increase in North America. … We are very optimistic.

Tesla’s European sales for May already had been reported as having increased by 240%.

On Thursday, Volkswagen launched is ID.4 all-wheel drive (AWD) Pro models in the United States. The dual-motor Pro EV offers an EPA-estimated range of 249 miles and the Pro S offers a range of 240 miles. The ID.4 is VW’s first new vehicle built on the company’s modular MEB platform. 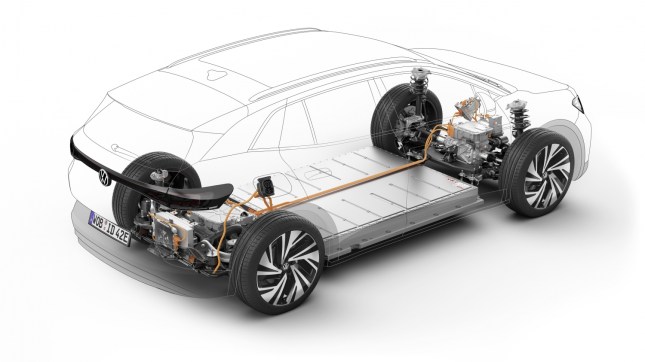 VW claims that the base manufacturer’s suggested retail price of $43,675 for the ID.4 AWD Pro is the lowest starting MSRP for an all-wheel-drive battery-electric vehicle in the United States. The ID.4 AWD Pro S starts at an MSRP of $48,175. Both vehicles are currently eligible for the U.S. federal tax credit of $7,500, lowering the cost to buyers to a base of $36,175 for the Pro and $40,675 for the Pro S.

Also on Thursday, EV maker Fisker Inc. (NYSE: FSR) announced that it had signed a binding agreement with Magna International Inc. (NYSE: MGA) that completed the deal between the two companies under which Magna will manufacture Fisker EVs through 2029. According to the announcement, the agreement covers planned volumes, manufacturing costs and quality metrics.

The two companies also confirmed that production of Fisker’s all-new Ocean SUV is expected to begin in November 2022 at Magna’s plant in Graz, Austria.

Finally, The Guardian had a story in late May about Australian mechanical engineer Daniel Bleakly, who has become a climate change activist in the coal-mining region of Queensland where he lives. His gig is letting people, mostly coal-miners, drive his Tesla Model 3 Performance to introduce them to the power of EV technology.

You can view Bleakly’s videos of some test drives. Be warned, though, that Australian coal miners have been known to use some salty language.