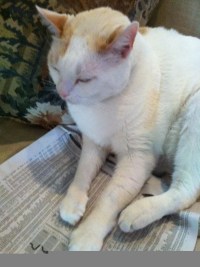 What has changed in the last two weeks is Europe.  Two weeks ago it was not expected that France was going to suddenly issue a citizen-wide veto of the austerity measures.  Now that Sarkozy has effectively lost to Hollande in French elections, France is taking a socialist step and is effectively boycotting its austerity measures.

The move in France followed an inability for the Dutch to reach a budgetary agreement, and now we have Spain back in trouble.  To add insult to injury, the new Greek politicos are just wanting to break the agreed-to austerity measures that allowed it to avoid default (as if you should be surprised there!).  Now we have Ireland even calling anti-austerity sounds with an implied return of Sinn Fein in the public.

Credit Suisse just lowered its S&P 500 target to 1,450 from 1,470 this morning and it has increased the odds that both Greece leaves the Euro and also that the Euro could dissolve entirely.

iShares Barclays 20+ Year Treasury Bond (AMEX: TLT) has risen almost $10.00 per share since March 20, 2012 and that shows just how much interest has been there from what are normally equity investors who are preferring to Buy exchange-traded Treasury debt products.  Its yield is currently about 2.85%.

Junk bonds have lost their luster again, and it was only a week or so ago that the index was hitting a new high.  SPDR Barclays Capital High Yield Bond (AMEX: JNK) recently peaked above $40.00 and it is now at $39.50.  Investors have also turned away from the high-payout MLP sector as the JPMorgan Alerian MLP Index ETN (AMEX: AMJ) product recently peaked at almost $42.00 and it is now under $38.70 despite what is a high ‘yield equivalent’ for investors.

The banking sector surged in the first quarter but it has pulled back substantially.  The Financial Select Sector SPDR (AMEX: XLF) peaked at $16.20 and it is now down at almost $14.90 for what is getting closer to a 10% correction.  The highly volatile and leveraged Direxion Daily Financial Bull 3X Shares (AMEX: FAS) peaked around $110.00 per share at the end of March and start of April and it is now challenging the $94.00 price.  Banks and financials are back out of favor, mostly due to fears about Europe dragging them down.

The real question is whether or not this is the signal of the next recession or whether this is a trade for the “Sell in May and go away!” theme that investors are more worried about.  All growth indicators from non-farm payrolls, purchasing managers, and manufacturing and services activity readings are pointing so far to what is just slower and slower growth.

In the United States, Q1-2012 GDP was up at only +2.2% as government spending was down by 3% in the quarter.  Europe is in all but a deep ‘official recession’ per most of its latest economic reports.  The growth in China and Brazil has seen a tempering throughout this year as well, with other key emerging markets like India and others in South America still seeing slower and slower growth.

The good news against the recession argument is that economists after the last earnings season still seem to be calling for positive growth in U.S. GDP in the second quarter at least as of now.  If that holds true and if the U.S. can avoid getting pulled down by Europe, then perhaps the U.S. will avoid an official recession even if this current growth is rather pathetic.  We also have an election and it is a near certainty that both Presidential candidates are likely going to say whatever they can get away with to win the election in November.

If Q2 does not show negative on the GDP front in the United States, then technically no recession can be declared until early in 2013.  That would coincide with what Ben Bernanke has warned about the financial cliff facing the United States at the end of 2012 and it is when the new tax structure takes place.

The market is definitely voicing concern here.  Is that a recession warning?  It depends upon your own outlook and upon your own interpretations.  It must also be noted that the current drop in stock prices is getting to be where stocks are getting close to ‘oversold’ on the short-term charts even if the fundamentals are of concern.

UBS Says Financial Technology Could Be Huge in 2021: 4 Stocks to Buy Now