Source: Jon Ogg
Fortress Investment Group LLC (NYSE: FIG) is going to see a wave of what would be considered to be insider selling. The private equity firm has announced that it has commenced a public offering to sell 28,280,000 Class A shares, which actually represent limited liability company interests.

This is a big deal on the surface, because the offering represents close to $225 million in total proceeds, while the company’s market cap is just under $1.5 billion.

Certain officers and senior employees of Fortress are selling 5,077,141 Class A shares. Fortress and certain selling shareholders have also granted the underwriters a 30-day option to purchase up to 4,242,000 additional Class A shares.

Fortress intends to use all of its net proceeds from this offering to purchase an equivalent number of outstanding Fortress Operating Group partnership units from its principals. Fortress will not retain any proceeds from the sale of shares by the selling shareholders.

Citigroup and Credit Suisse will serve as joint book-running managers and as representatives of the several underwriters in the offering. 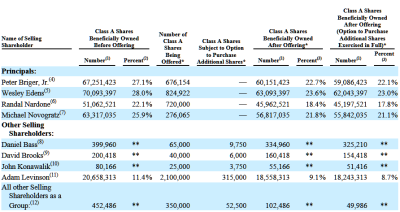