How to Predict Which Banks Will See Largest Dividend Cuts

The Federal Reserve Board’s 2020 stress tests and additional sensitivity analysis have been a much harder review based on the impacts of the coronavirus turning into the COVID-19 pandemic and the economic recession. The big banks largely have suspended their buybacks already, but the main issue that will be felt by bank stock investors is the coming dividend cuts.

While the point of the review was to ensure that the nation’s large banks can remain resilient and well capitalized during this recession and period of economic uncertainty, the problem is that the banks already are seeing worse economic conditions than what had been classified in previous serious adverse economic circumstances. It also came down on the banks almost overnight.

The Federal Reserve will require that large banks preserve capital by suspending all share repurchases, and many of the banks already announced such actions. The dividends will be allowed based on a formula centered on recent income, and all the banks are being asked to reevaluate their capital plans for the long term. Where the divergence between stock buybacks and bank dividends has differed is that share repurchases have represented roughly 70% of all shareholder payouts from the large banks in recent years.

24/7 Wall St. reviewed the cap on bank stock dividends by looking at it on those paid in the second quarter and being given a further limit based on recent earnings. The end result is that the large banks will not be allowed to increase their dividend and their future dividends can only be paid out if the bank has earned sufficient income. While some banks may be able to prove that they have so far remained healthy under reviews, some bank yields are now so high that banks that might not even be under as close of scrutiny would be candidates for cutting their own payouts until the dust settles in the economy.

While we have focused on the larger banks, the same sort of dividend issue could come into play in many of the smaller, regional banks. The Federal Reserve might not be as strict on those smaller players, but from a corporate governance standpoint, their underlying boards of directors should know that they may be keeping too much liability and risk if they do not address a dividend yield that is too high.

While JPMorgan is considered to have a fortress balance sheet under CEO Jamie Dimon, he has warned about bank dividends on more than one occasion. Wells Fargo’s dividend yield should probably be viewed as something that is no more than mythical at this point.

These are not the only large financial institutions and banks that have incredibly high dividend yields. Using the 5% level as a cut-off, note that Fifth Third Bancorp (NASDAQ: FITB) has a 5.7% yield on its common stock, now that its shares are still down about 40% from its highs.

Huntington Bancshares Inc. (NASDAQ: HBAN) shares are still down about 42% from their recent annual highs, and its dividend yield is 6.8%.

KeyCorp (NYSE: KEY) is still down over 40% from its highs, and it screens out with a 6.3% dividend yield.

Regions Financial Corp. (NYSE: RF) is still down almost 38% from its annual high, and it screens with a 5.8% yield.

Bank of America Corp. (NYSE: BAC) and Citigroup Inc. (NYSE: C) actually might come out better than some of the others this time around, despite having been under more scrutiny in prior years. They have dividend yields of 3.1% 4.1%, respectively.

What is important to consider here is that all the banks currently have at-risk dividends. Some banks have already more or less admitted that, but the real issue is what happens as the economic readings and consumer metrics are expected to remain weak for some time yet as the number of COVID-19 cases continues to surge. Some banks may have an idea of their dividends ahead, but they could be forced into an adjusted review in future quarters if the economy does not improve.

The graph below shows just how high these dividend yields look, and it is important to keep in mind that a 10-year Treasury yield is just 0.65% and the median dividend yield of the 386 or so S&P 500 components that pay dividends is about 2.5%, without screening out some of the most recent changes that have yet to be included. 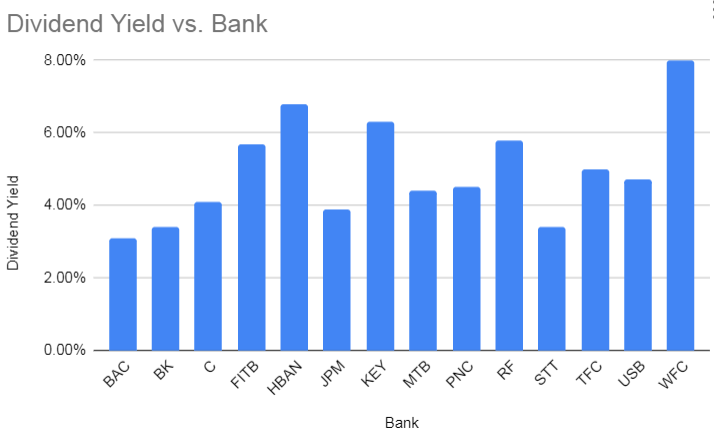