It had been a while since the real gold bugs got to make their endlessly higher calls, but the latest surge ahead of and after QE3 in gold, silver and other inflation-hedging and monetary devaluation-hedging has allowed the gold bugs to rise once again. The latest call is not so much of an exact prediction, but Bank of America/Merrill Lynch has come out and outlined the secular bull case for gold going up to $3,000 per ounce.

The firm clearly states being a secular bull on gold and said:

Key chart and uptrend supports between $1600 and $1400 have held and we have viewed $1,550 to $1,500 as a good area to buy gold. The breakout above the year-long downtrend line completes the correction within the longer-term uptrend and targets resistances at $,1800 and $1,925.

As part of the positive reports on gold today, BofA has raised the rating on Gold Fields Ltd. (NYSE: GFI) to Buy from Neutral. Unfortunately that call is not creating momentum as the ADRs in New York trading are down 0.5% at $13.02. One of the key catalysts is that it has one of the best dividends of all gold players. BofA also raised its target to $8.60 on shares/ADRs of DRDGOLD Ltd. (NYSE: DRD) versus its share price of $6.14 on Monday’s close, and it raised the target on AngloGold Ashanti Ltd. (NYSE: AU) ADRs to $51.10 versus a $36.29 close on Monday. Anglo shares are up only 0.6% in New York ADR trading but DRDGOLD ADRs are up over 5% so far on the call.

There is one thing to consider here and that is silver. If gold can rise to $3,000, then silver almost has to under any normal scenario follow suit. iShares Silver Trust (NYSEMKT: SLV) is up 0.7% at $33.15. Silver Wheaton Corp. (NYSE: SLW) on the other hand has pulled back substantially since we pointed out how the SLW:SLV chart ratio had gotten so far out of line.

We would note that this is not the first time that BofA has been very aggressive on gold or on silver. Back in April of 2011, BofA outlined the potential path to $80 per ounce of silver. If gold heads toward $3,000 then that call will almost certainly not sound so silly down the road.

For whatever it is worth, Citigroup has also raised some near-term targets today. Its target on gold was raised about 2% to $1,681 and the silver target was raised about 5% to $32 per ounce. 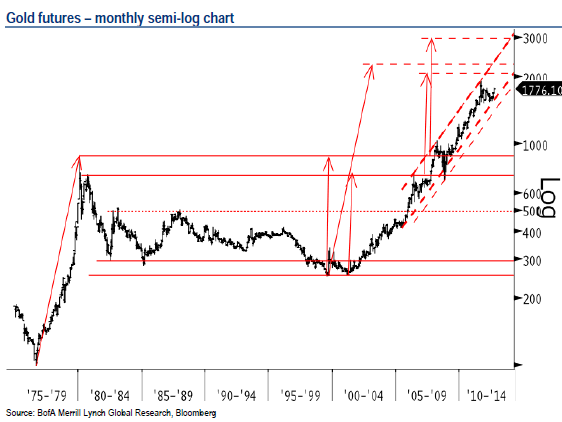