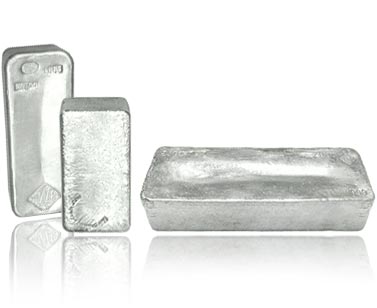 Silver keeps rising against Gold.  Gold is supposed to be the ultimate inflation trade and hedge against world currencies, but perhaps silver is the better judge of that.  It is now the iShares Silver Trust (NYSE: SLV) which keeps hitting new highs each day.  The SPDR Gold Shares (NYSE: GLD) would have been impressive enough, but the silver move has become out of sight.

The move in the last three months is barely up in gold but up over 20% in silver.  In the last year the move in gold has been more than 25% but that move has been up more than 100% in silver.  The gold/silver ratio now sits above 37 and this appears to be the lowest in modern investing times, reflecting this monumental rise in silver prices. 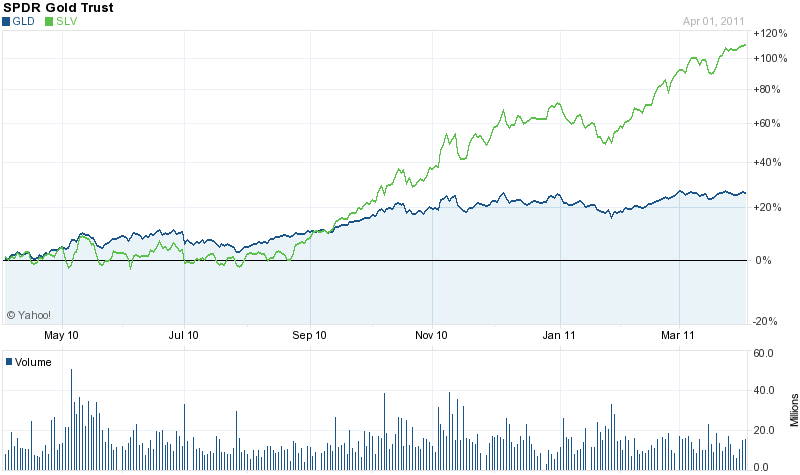 In the Armageddon trade where the world goes onto the barter system, silver is better when you consider the ‘on the ground’ level for the masses.  One ounce of silver should always buy a case of beer or daily food rations and more than enough water to live off for some time.  If food, water, or beer ever cost the same as an ounce of gold, then it is either the rarest item in the world or things have gotten so far out of whack that the world is all but gone.  We understand the other arguments about jewelry versus industry, central bank use versus private sector use, and the rest.  In many cases it is arguing about whether you’d rather have $1,000 in $10 bills or in $100 bills. 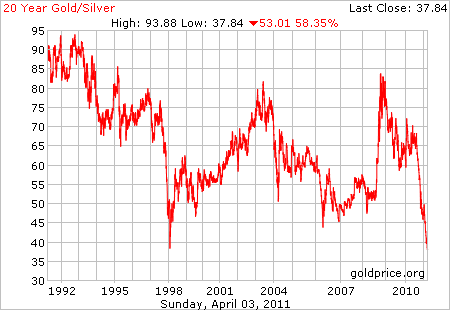 Goldprice.org keeps long-term charts on the gold/silver ratio and the reading is as we suspected.  What had historically been a range of 50 to 70 has narrowed before.  Chances are that it will narrow again, but we are back to the extreme sub-40 levels seen briefly in 1997 and 1998.  Adam Hewison, our technical analysis affiliate just addressed this again last week.

As a reminder, after you see enough market pundits putting down a trend that has kept going it usually means it is close to the peak.  If you want a non-directional trade for silver versus gold or gold versus silver, you can buy and sell these two liquid iShares products against each other.  Whether or not that is the case here is hard to know.  Our crystal ball is in the shop.