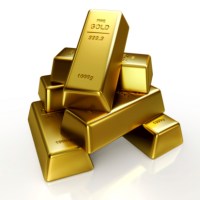 Source: Thinkstock
Gold miners have been hit hard in the past 12 months by falling prices for the yellow metal and by higher mining costs. Over the course of the past year, prices are nearly flat, down just 0.76%, but from highs around $1,800 an ounce to lows around $1,525 an ounce, volatility has been hard on miners.

The other major impact on gold mining profits has come from rising costs due primarily to labor costs and lower grade ores. The lower grade ores mean the companies have to dig up more ore, although they get some relief in the form of lower fuel costs and a strong dollar. Strikes in South Africa have closed some mines for weeks and that will also add to costs.

Barrick Gold Corp. (NYSE: ABX) reported fiscal third quarter EPS of $0.85 on revenues of $3.44 billion this morning, badly missing consensus estimates for EPS of $0.99 and $3.61 billion in revenues. The company’s average realized price for gold totaled $1,655 an ounce and net cash costs came in a $592 per ounce. The company’s lowered its production guidance and raised its cash cost guidance as well, so the stock is taking a beating today.

Goldcorp Inc. (NYSE: GG) reported third-quarter results last week and beat the EPS estimate of $0.45 by $0.09. On a co-product basis, the company’s total cash cost per each ounce of gold produced was $670. Goldcorp’s average realized gold price for the quarter was $1,658 per ounce. Production grew by 2% year-over-year, mainly the result of higher grade ores. The current fourth quarter estimate calls for EPS of $0.57 on revenue of $1.58 billion.

Newmont Mining Corp. (NYSE: NEM) has seen its EPS estimates fall from $1.04 to $0.91 in the last 3 months. Revenue is expected to reach $2.52 billion when the company reports earnings tomorrow. In the second quarter, Newmont missed the consensus EPS estimate by nearly 37% and the estimate for this quarter is more than 25% lower than for the third quarter of 2011.

AngloGold Ashanti Ltd. (NYSE: AU) has seen its EPS estimate collapse in the last 90 days, from $1.06 to $0.76. The company last week settled strikes at three of its South African mines, but three other mines remain shut down because of the labor actions. At the end of September, the company’s production totaled 1.03 million ounces of gold for the three-month period, well short of the estimated production range of 1.07 to 1.1 million ounces. The cash cost range at the higher production estimates had been $835 to $865 an ounce. The company reports earnings on November 8th.

Gold prices are nearly flat today, with futures around $1,717 an ounce. Gold prices above $1,700 an ounce for the current quarter would really help miners meet or beat fourth quarter estimates..