Gold May Stay Down for a While 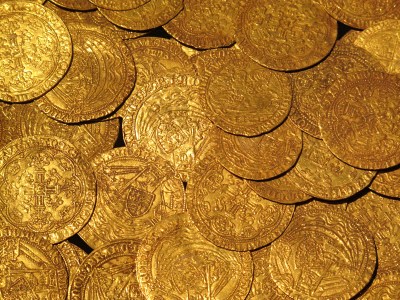 Source: Thinkstock
Gold was down nearly 2% in Monday morning trading. It briefly touched $1,088.05 per ounce, representing its “weakest” point since March 2010, according to Reuters. Moreover, gold suffers from an overall bearish sentiment in general. Let’s take a look to see what specifically is driving gold downward and ascertain whether it will turn around anytime soon.

Gold, like everything else in the financial markets, is subjected to the expectations game. Sometimes the change in fundamentals does not matter as much as the change in fundamentals versus the expectations of pundits who help drive prices in the market. China, after six years of radio silence on its gold transactions, revealed that it owned 1,658 metric tons of the metal, which represented an increase, according to Bloomberg. However, it was not as much as expected by some notable brokers. This adds to the bearish sentiment toward gold, compelling investors to exit the asset.

Another reason behind the gold drop lies in the strengthening dollar relative to many global currencies. This makes the dollar more expensive from the perspective of countries other than the United States. This may stem from the softening of global economies, such as in China. This makes it difficult for the United States to export gold, which is denominated in the dollar, to other countries.

Also, speculation in the financial markets about a hike in U.S. interest rates adds to the sour sentiment toward the precious metal. Investors shed gold to increase their cash liquidity in anticipation of finding bonds that will pay a higher interest rate.

Gold’s saving grace may come from steady, or lower, interest rates and more frequent reports from China stating it is buying more gold than expected by financial pundits. However, gold prices most likely will stay soft for a while as doubts probably will linger as to China’s gold hoarding ways. In addition, investors most likely will continue to flock to the U.S. dollar, as long as global economies such as China remain soft, making it difficult for the United States to export gold. Finally, the gold bearish sentiment probably will continue.