Stunning View of the Second Largest Diamond Ever Found at 1,111 Carats

You have probably heard the saying “diamonds are a girl’s best friend” more than just a few times. It turns out that not all diamonds are created equal, and some diamonds are worth a whole lot more than others. News of the second largest diamond ever found may bring up the argument whether size matters.

A Canadian company named Lucara Diamond announced on Wednesday that it had uncovered the world’s second largest diamond ever found. Then on Thursday Lucara also announced that two more exceptional white stones also have been unearthed through the XRT diamond recovery units at its Karowe Mine operation in the nation of Botswana.

So, just how big is the world’s second largest diamond and where did it come from? It was a 1,111 carat gem quality, Type IIa diamond. While this is the second largest diamond ever found, Lucara Diamond said that this stone was the largest ever to be recovered through a modern processing facility. Here is what 1,111 carats translates to in actual size: 65mm × 56mm × 40mm.

A second press release covered the two additional diamonds found, and they are also massive. Two white diamonds, an 813 carat stone and a 374 carat stone, were recovered from the prolific south lobe of Lucara’s Karowe mine in Botswana. The company did note that the weights of the other two stones are subject to change as they had not yet been cleaned.

For a comparison, the well-known Hope Diamond is a different sort of diamond, a Type IIb blue diamond. It is roughly 24.5 carats.

The largest diamond ever found was the Cullinan stone from South Africa more than 100 years ago. That stone was said to be 3,106 carats.

William Lamb, president and CEO of Lucara, has had two big quotes this week around these finds. The comments have been grouped, but they are from two different releases. The first is for the 1,111 carat find and the second quote is for the other two stones. Lamb said:

This historic diamond recovery puts Lucara and the Karowe mine amongst a select number of truly exceptional diamond producers. The significance of the recovery of a gem quality stone larger than 1,000 carats, the largest for more than a century and the continued recovery of high quality stones from the south lobe, cannot be overstated. Our focus on mining the south lobe, which is delivering value beyond expectation, has been perfectly timed with the commissioning of our recent plant modifications, enabling the recovery of these large, high quality exceptional diamonds.

I am truly at a loss for words. This has been an amazing week for Lucara with the recovery of the second largest and also the sixth largest gem quality diamonds ever mined. We are truly blessed by this amazing asset.

Lucara Diamond is based in Vancouver, Canada, but its principal properties include the following: a 100% interest in the Karowe Mine that covers 15.3 square kilometers of mining license located in Botswana, and a 75% interest in the Mothae Diamond Project, which consists 20.0 square kilometers mining license located in Lesotho. Lucara Diamond was formerly known as Bannockburn Resources and changed its name in August 2007.

Lucara Diamond is a public stock traded in Toronto under the LUC ticker. Its shares were last seen up better than 20% at C$1.98, for a market cap of C$751 million.

24/7 Wall St. took a couple of other quotes about diamonds from the BrainyQuote website: 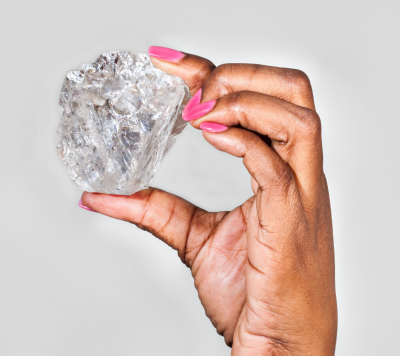