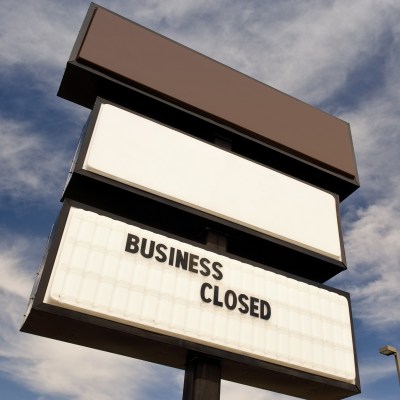 Source: Thinkstock
Each year, 24/7 Wall St. identifies 10 American brands that we predict will disappear, either through bankruptcies or because of mergers. Bankruptcies of large public companies in 2015 have already exceeded 2014 totals. Similarly, the total value of mergers and acquisitions is projected to hit a record high in 2015. While some of the companies on this list may disappear because they continue to be at the bottom of their industry, some may disappear because they are doing well.

Over the years, some of our predictions have been better than others. Some of our predictions — like Alaska Air — have been dead wrong. Other brands we said would disappear — like Aeropostale — have survived but are still failing companies. Blockbuster, DirecTV, American Apparel, and Sony Ericsson are among the brands that have gone bankrupt or have been acquired since appearing on our list. These brands have not yet disappeared completely, but may still in the near future. For this reason, this year we included some brands from previous years’ lists.

It is often difficult to tell when a brand has truly failed, especially since a company may fail while its brand may live on. In an acquisition or merger, often the better known brand is chosen to represent the new company regardless of the company’s financial position before the merger. In other cases, a company’s operations cease entirely through bankruptcy, but its brand lives on after the liquidation.

Click here to see the 10 brands that will disappear.

Retail continues to be one of the sectors with several troubled brands that may have to be sold to survive, or as in the case of A&P, will not survive at all. The 24/7 Wall St. list includes American Apparel and Pacific Sunwear (NASDAQ: PSUN). These small niche companies with shaky financials try to compete with much larger retailers that have more stores, large marketing budgets, and strong balance sheets. Like most retailers, these companies also must contend with the growing dominance of Amazon.com and other e-retailers.

The list also contains companies with problems arising from devastating events. Ashley Madison and the VW’s TDI brand fall into this category. One piece of news that exposed these brands, on a single day rippled around the world and almost instantaneously destroyed years of brand building.

Mergers have killed other brands on this list. Office Depot (NYSE: ODP) acquired OfficeMax, and now Staples (NASDAQ: SPLS) is close to taking over the company created by the combination. OfficeMax, the weaker of the three office brands will likely go away altogether.

Factors we considered as potential evidence of a brand’s eventual disappearance include:

Declining sales and losses;
Disclosures by the parent of the brand that it might go out of business;
Rising costs that are unlikely to be recouped through higher prices;
Companies that are sold or merged;
Companies that go into bankruptcy; or from bankruptcy into liquidation
Companies that have lost the great majority of their customers; and
Operations with withering market share.

Each brand on the list suffers from one or more of these problems.

These are the brands that will disappear.