From a recent low of around $10,000 on September 8, bitcoin has appreciated by about 80%, while gold is down about 6.8% and silver is down more than 16% in the same period. On October 20, bitcoin still traded about 0.7% below its level in early September.

Then PayPal Holdings Inc. (NASDAQ: PYPL) announced on October 21 that it had enabled cryptocurrency payments directly from its customers’ accounts and that it would make cryptocurrency available as a funding source for its 26 million merchant customers worldwide.

On its own, that doesn’t mean an awful lot, but a peek under the hood suggests one reason for the recent increase in bitcoin. PayPal instantly became the biggest acquirer of bitcoin, taking nearly 70% of all new supply of the cryptocurrency. Cash App, the mobile payment service backed by Square Inc. (NYSE: SQ) and PayPal combined, accounts for purchasing more than 100% all newly issued bitcoin, according to Pantera Research.

That situation implies that scarcity is the big driver of the current run-up in bitcoin pricing. Unlike silver or gold, there is a fixed limit on the amount of bitcoin that can be mined.

While bitcoin miners are still a few years away from digging out the maximum 21 million bitcoin available, nearly 500,000 bitcoin have been added to network circulation in the past 12 months, and the total currently mined amounts to 14.8 million, according to Chainalysis.

Unlike bitcoin, gold has been around for millennia, and over those thousands of years a total of nearly 198,000 metric tons of gold have been mined and nearly all of it is still around, according to the World Gold Council. New mining adds about 2,500 to 3,000 metric tons to the world’s supply every year.

The U.S. Geological Service estimates that 1.74 million metric tons of silver have been mined over the course of human history. Unlike gold, however, most of the silver mined has been lost to industrial use and never been recycled.

Research firm Nairametrics estimates that the value of 77% of the all mined bitcoin has been locked up in user wallets for more than five years and is essentially illiquid. Of that total, some 3.7 million already-mined bitcoin have essentially disappeared forever and will never again be available to anyone. The disappearance may most likely be due to the death of a wallet holder who did not leave a password or instructions on how to retrieve the bitcoin.

Is it too soon to suggest that once bitcoin’s two large buyers (PayPal and Square) decide they have enough cryptocurrency to meet their needs, the music will stop? Of course, another big purchaser may appear by then, or the boom in bitcoin will shift to one of the other cryptocurrencies if bitcoin gets too rare and expensive.

What of gold, the perennial store of value, and silver, both a critical industrial metal and a store of value? Over the past three years, since bitcoin posted its all-time high, the cryptocurrency still has a ways to go to catch up with commodity gold or silver. 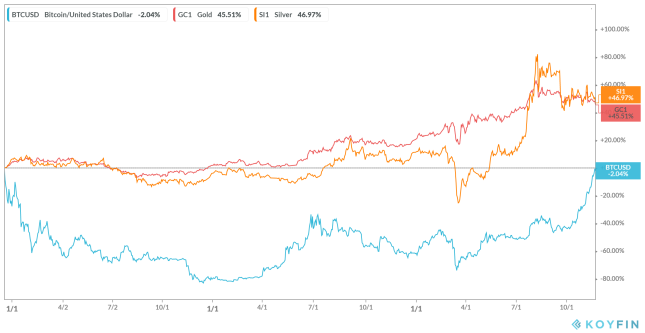 The iShares Silver Trust (NYSEARCA: SLV) has traded down just over 16% since September, and the Aberdeen Standard Physical Silver Shares ETF (NYSEARCA: SIVR) by about the same amount.

Since the beginning of the year, however, the story remains highly favorable for the cryptocurrency, with bitcoin up by 167% while commodity silver is up 31% and gold is up more than 17%. And those percentages are close to 12-month percentage increases as well.