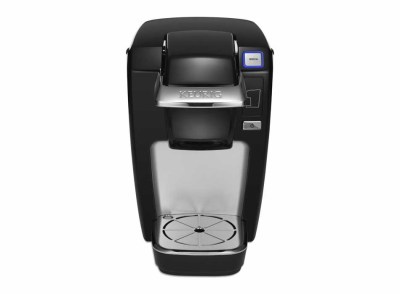 Source: courtesy of Keurig Green Mountain Inc./Consumer Product Safety Commission
The U.S. Consumer Product Safety Commission (CPSC) has initiated a recall of more than 7 million coffeemakers made by Keurig Green Mountain Inc. (NASDAQ: GMCR) between 2009 and 2014. The company’s MINI Plus single-cup brewing system was sold at the company’s online store and at retailers including Target Corp. (NYSE: TGT) and Wal-Mart Stores Inc. (NYSE: WMT) for about $100.

The company has sold about 6.6 million of the units in the United States and 564,000 in Canada. The coffeemakers that are included in the recall have an identification number beginning with “31” followed by a range of other numbers on a white sticker on the bottom of the brewer. The full list of number ranges is available at the CPSC website.

Keurig has received about 200 reports of hot liquid escaping from the device, of which about 90 report burn-related injuries. According to the CPSC, water can overheat during brewing and spray out of the machine and scald users.

Consumers are being instructed to contact Keurig for a free repair and for information about what to do to avoid getting scalded while waiting for a repair. The brewing machines are manufactured in China and Malaysia, according to the CPSC.

A similar recall was issued in 2012 for a single-cup coffeemaker made and sold by Mr. Coffee under license from Keurig.