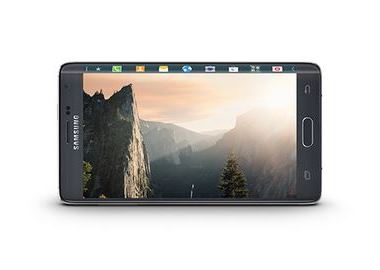 Source: courtesy of Samsung
Between January 2014 and January 2015, usage of mobile devices like the iPhone 6 Plus from Apple Inc. (NASDAQ: AAPL) and the Samsung Galaxy Note — so-called phablets — has grown by 148%, far faster than any other type of mobile device. Small phones, with screens smaller than about four inches, and full-size tablets both posted lower numbers over the course of the sample period, while medium-size phones and small tablets put up decent if not awesome growth.

Researchers at Flurry Analytics, a Yahoo! Inc. (NASDAQ: YHOO) company that conducted the study, conclude that “the mobile industry has found a killer form-factor.” The combination of the larger screen and simple navigation with far more portability are the primary reasons for the growth of phablets.

ALSO READ: Who Will Buy the Samsung Galaxy S6?

The super-charged growth may be partially attributed to the fact that the base in January 2014 was low and that any growth would be relatively large. But the introduction of the iPhone 6 Plus last fall almost certainly provided the biggest push. Flurry says that the phablet is a “game-changer” and the “killer media-consumption device.”

Flurry also noted that the real victim of the phablets’ success is the mobile Web:

While growth in entertainment usage and news reading is not terribly surprising, the giant leap in phablet usage for watching sports is a surprise. If there is a single compelling reason to subscribe to pay TV it has to be sports coverage. If consumers are voting with their wallets for more mobile access to sports, those wildly expensive sports broadcasting contracts could be worth far less if they do not include mobile access. The times could indeed be a-changing.