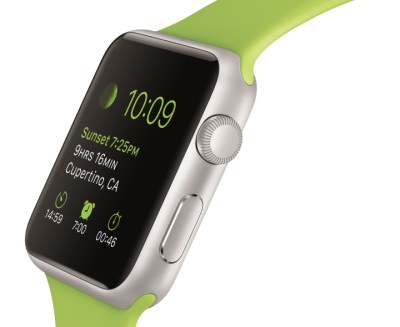 Source: courtesy of Apple Inc.
How much do investors value the upcoming Apple Watch and the iPad, compared with the strength of the iPhone upgrade cycle? This remains up for debate, but Bank of America Merrill Lynch has issued a very mixed product report for Apple Inc. (NASDAQ: AAPL). The firm did maintain its Buy rating and the $140 price target in the call. Where the mixed nature of the call comes into play is around the iPad — and the Apple Watch.

The first issue is that Merrill Lynch’s iPhone momentum remains strong. The firm’s channel checks over the past week in Asia suggested that the near-term momentum of the iPhone supply chain remains strong. The firm also raised its near-term iPhone estimates for the first calendar quarter to 60 million units from 54 million units. The calendar second quarter saw estimates raised to 45 million from 42 million, and the third quarter was raised to 41 million from 40 million.

Merrill Lynch’s total fiscal 2015 iPhone estimates were raised to 220 million from a prior 210 million expected. The firm’s Buy rating was based on the following: a strong iPhone product cycle; new revenue sources like Apple Pay, Apple watch, home/health kit; and optionality provided by a significant cash balance that can help accelerate innovation into new markets. The analysts said:

The mix remains relatively stable in the near term at 60% iPhone6 and 40% iPhone 6 Plus. Although Samsung Galaxy S6 appears to be tracking better than expectations, we see low risk of market share loss at the high end.

An area of larger concern than the iPad was the pessimism in Asia around the Apple Watch. Merrill Lynch pointed out specifically that the supply chain remains very cautious, but they noted that this was similar around the first iPad launch. There were several mentions of a tough manufacturing process. Merrill Lynch’s note said:

In our opinion, this is not unexpected given the complexity of the product. We are modestly lowering our estimates for the Apple watch to reflect a slightly more conservative view in the near term from 13.0 million in Fiscal 2015 to 9.0 million units and pricing that appears to be higher than our expectation. However, we remain bullish on the longer term prospects of the watch.