Apple Inc. (NASDAQ: AAPL) launches its HomePod voice-controlled speaker on Friday and demand for the device has been strong. On Tuesday the company announced that the HomePod would no longer be available for pickup in U.S., U.K. and Australian retail stores. On Wednesday the company said U.S. customers would no longer be able to place an order for delivery on the launch date.

Sold out. Good news, right? Absolutely. Of course we don’t know how many HomePods Apple is shipping, so the announcements don’t offer much data about volume.

One thing we do know, however, is that Apple is starting in a big hole. According to analysts at Taiwan-based TrendForce, Amazon.com Inc. (NASDAQ: AMZN) had global market share of 69% in 2017 with its Echo-brand speakers and Alphabet Inc. (NASDAQ: GOOGL) claimed an 18% share with its Home-brand speakers. Apple had zero.

Now that Apple has a product in the game, TrendForce estimates that Amazon’s share will drop to about 51% in 2018, Google’s share will increase to about 22% and Apple will claim 9% of the worldwide market for smart speakers. Alibaba Group Holdings Ltd. (NYSE: BABA) is forecast to grab just over 6% of the global market.

TrendForce suggests that the U.S.-based firms may have a longer-term problem though:

[S]mart speakers launched by these major brands are mainly based on speech recognition of English. As the result, they find it hard to enter the huge Chinese market despite the opportunities there. Therefore, Alibaba and Xiaomi have entered smart speaker market in 2017, focusing on developing products for Chinese market. Alibaba cuts into the market with its self-developed artificial intelligence and cloud technologies, while Xiaomi is backed by its broad product mix of hardware, which will enable the two companies to catch up.

First, HomePod puts more focus on audio performance than intelligent home assistance which should be the core value of smart speaker. Second, the business ecosystem for Apple has a high standard so that application providers may find it difficult to enter. As the result, HomePod’s limited support for third-party apps will make it harder for HomePod to fully realize the functions of smart speaker. Third, some functions of HomePod overlap with Siri in iPhone.

The following chart shows 2017 market share in the inner circle and TrendForce’s estimate for this year in the outer circle. Notice that Alibaba and Xiaomi together claimed 12.6% of the global market last year, their first year in the smart speaker market. Apple is projected to do less well in its first year. 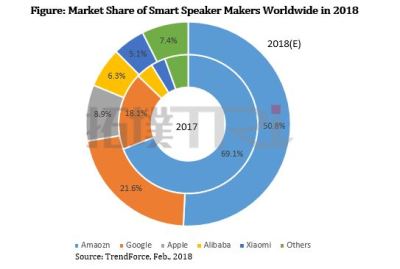