There has been a great deal of concern about the future of the iPhone X, Apple Inc.’s (NASDAQ: AAPL) most expensive iPhone model. That worry was overdone. The iPhone X was the best-selling smartphone model, based on shipments, in the world during the first quarter of 2018. The iPhone 8 and iPhone 8 Plus were just behind it and ahead of all competition.

We estimate the Apple iPhone X shipped 16.0 million units and captured 5 percent marketshare worldwide in Q1 2018. For the second quarter running, the iPhone X remains the world’s most popular smartphone model overall, due to a blend of good design, sophisticated camera, extensive apps, and widespread retail presence for the device. Apple has now shifted almost 50 million iPhone X units worldwide since commercial launch in November 2017. The Apple iPhone 8 and iPhone 8 Plus shipped 12.5 and 8.3 million units, respectively, for second and third place. The previous-generation iPhone 7 shipped a respectable 5.6 million units for fourth place. Combined together, Apple today accounts for four of the world’s six most popular smartphone models.

Trailing the iPhone was a model made by China’s Xiaomi, the Redmi 5A, with a market share of 5.4%. Just behind, Apple’s primary rival Samsung had a 5.3% share with its Samsung Galaxy S9 Plus.

Leading up to its earnings, there were rumors that Apple might abandon the iPhone X because of its high retail price. Apple sells the most expensive version of the phone, with 256 gigabytes of storage, for $1,149. Wireless carriers that sell the model cut prices as low as $41.66 with a two-year subscription plan.

Rather than being a failure, the iPhone X has put Apple into the lead of the new generation of smartphones. Apparently, consumers have decided its features trump its high price. 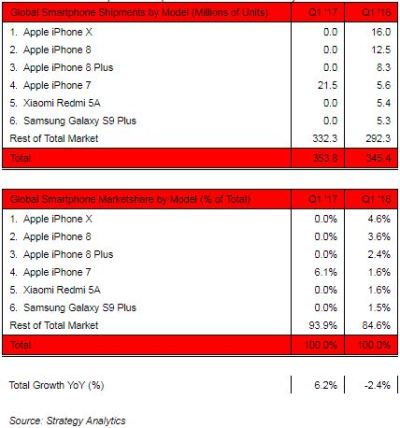