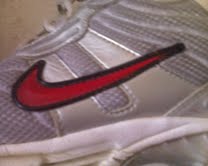 On its second-quarter earnings report, Nike Inc. (NYSE: NKE) posted EPS of $0.94 on revenue of $4.84 billion. Both numbers exceeded expectations — analysts were expecting EPS of $0.88 on revenue of $4.81 billion. The detail devil caught up with Nike, though, and the company’s share fell about 4% in after-hours trading following the report.  What hit Nike’s shares is a less-than-bubbly forecast for the rest of its fiscal year. Analysts had been expecting order growth of 11.6% for December, but Nike reported a rise of “only” 11%.

The other, and perhaps bigger, issue was Nike’s concern about pressure on its margins in the coming quarters. Nike’s CEO said that commodities costs, labor, and transportation are all rising and that the effects of these cost increases will soon show up in the company’s earnings. According to Bloomberg, Nike’s CFO expects pressure on the company’s margins for up to 18 months.  Gross margins could fall as much as 50 basis points, wiping out more than half of the company’s 80 basis-point gain over the second quarter of last year. The company could also face some currency exchange losses if the dollar continues to strengthen.

While Nike was downplaying its prospects, competitor Adidas AG (OTC: ADDYY) was predicting that its growth in the US would outpace Nike’s in 2015. The company’s CEO told a German newspaper that it wants to grow average annual earnings at a rate of 15%, according to Reuters.  Adidas had been planning on annual growth of 8%, so this is a fairly dramatic boost to its plans.

Under Armour, Inc. (NYSE: UA), another competitor in sports apparel, has recently been downgraded from ‘Buy’ to ‘Neutral’ at UBS, and the shares have been pummeled, dropping from a new 52-week high set just one day before the downgrade.

Lululemon Athletica Inc. (NASDAQ: LULU), also a sports apparel maker, has seen its share’s jump to new 52-week highs in the past two weeks as well. For the past 52-weeks, Lululemon shares have gained about 140% and Under Armor shares are up more than 110%. Nike shares are up about 40%, and Adidas shares up just over 20%.

Nike’s shares are trading down more than -5.5% in early trading this morning.