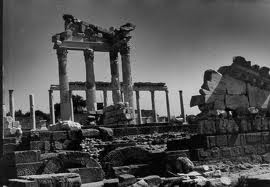 A city does not die when its last resident moves away.  Death happens when municipalities lose the industries and vital populations that made them important cities.

The economy has evolved so much since the middle of the 20th Century that many cities that were among the largest and most vibrant in America have  collapsed. Some have lost more than half of their residents. Others have lost the businesses that made them important centers of finance, manufacturing, and commerce.

Most of America’s Ten Dead Cities were once major manufacturing hubs and others were important ports or financial services centers. The downfall of one city, New Orleans, began in the 1970s, but was accelerated by Hurricane Katrina.

Notably, the rise of inexpensive manufacturing in Japan destroyed the ability of the industrial cities on this list to effectively compete in the global marketplace.  Foreign business activity and US government policy were two of the three major blows that caused the downfall of these cities.  The third was the labor movement and its demands for higher compensation which ballooned the costs of manufacturing in many of these cities as well.

The Census data also describes the shift of much of the population to cities which were not considered large at all in 1950. Most of these are in the southern part of the US.  Rising populations in these locations has been driven by the growing number of retired people and a relocation of the nation’s workforce.  This is how San Diego, Phoenix, and San Antonio have moved onto the list of the ten largest cities in America.

Researchers at the Massachusetts Institute of Technology did a study of what they described as America’s 150 forgotten cities. The municipalities on their list were medium-sized and ranked by measurements that included poverty. The reason for their demise largely match the cities on the 24/7 Wall St list. The MIT research work goes beyond a mere list of statistics and points out reasons why some of these cities will never recover. In almost every case, tax bases have disappeared, which has undermined the ability of local governments to spend money on revitalization. Abandoned areas of these cities have high crime rates, which not only keeps people from relocating to these areas but is actually an incentive for them to move away.  This in turn, leads to the image of these cities as desolate urbanscapes.

In 1900, Buffalo was the eighth largest city in America. It was located on one of the busiest sections of the Erie Canal, the terminus of the canal on the Great Lakes. Thanks to its location, Buffalo had huge grain milling operations and one of the largest steel mills in the country.  Buffalo prospered during WWII as did many northern industrial cities. After the WWII, the manufacturing plants returned to the production of  cars and industrial goods. The population rose to more than 500,000 in the mid-1950s. It is half that today. Buffalo was wounded irreparably by the de-industrialization of America.