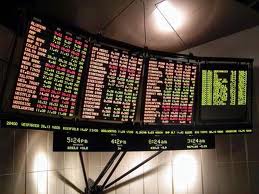 US stock markets may continue to make an assault on their all-time highs as the year goes along. The DJIA  trades at 12,000 not so far from its 2007 peak of 14,000. A number of stocks like Apple (NASDAQ: AAPL) trade at all-time highs now. That is largely based on the assumption that the global demand for US goods and services will expand without important disruption. Many investors believe that US industrial production has recovered from the recession.  High unemployment and an awful housing market have been largely ignored by traders.

There is a silver lining to nearly every cloud that casts a shadow of trouble in the economy. The sovereign debt crisis in Europe drives money to the safe haven of US government paper and the stocks in large American multinationals. The expected demand for US goods and services in emerging markets increases the foundations of the logic that American stocks are worth the risk. Surely China and India will import more US goods as their GDPs expand. The lack of imports to dying European economies can be more than offset. Earnings of America’s largest companies will increase without interruption.

Oil prices should hurt the value of American stocks. High fuel prices will undermine the GDP growth of the US.   Many economists argue otherwise and for the time being their logic has been more powerful than that of energy inflation pessimists. The American economy is more resilient than it was when gas prices rose above $4 in 2008. The ability to hedge crude is more sophisticated. The US has a strategic petroleum reserve. The earthquake in Japan will dampen crude demand for months.

The unrest in the Middle East should also hurt the value of US stocks. The oil supply interruption has pushed crude above $100.  But, once again optimists see a slowing economy in China and thus a lower need for oil there. And America has access to its own oil reserve. The Saudis have said publicly that they will offset a drop in Libyan production. Uprisings against the Saudi princes were stillborn.

The last major drag on US GDP recovery should be the unemployment and housing markets which have bedeviled the American economy since 2007. Stock market investors have largely shrugged these off. The idea that GDP can reach 3% or even 4% is grounded in the theory that what American consumers cannot buy, emerging market consumers will.  Many US home homeowners do not have access to equity in their houses. That may be a powerful incentive for people to cut household spending. But, retail activity rose at the holidays and early this year.

The stock market is suppose to climb a wall of worry. Presently it is pushed higher instead by an expectation that the American economy will enjoy an expansion like the one in the mid 2000s. That may appear to be misplaced optimism, but it has not stopped what has become a virtual buying frenzy in US equities.

This Is the County Where the American Dream Is Completely Dead