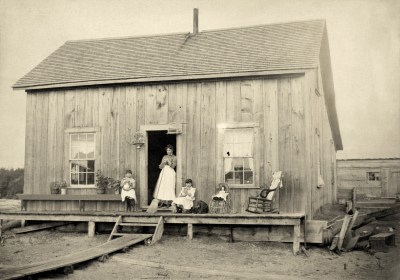 Source: Thinkstock
Thought it is barely above the poverty line, many Americans believe that they can live on $24,000 a year. The number is implausibly low, but perhaps a sign that many people have set their financial aims downward since the start of the Great Recession.

A new Gallup poll on financial security in the U.S. shows that:

About seven in 10 Americans, including a majority of those making more than $24,000 a year, say they have enough money to do what they need to do. However, it is not until Americans reach $48,000 a year in annual income that a majority say they can handle a substantial purchase or unexpected major expense.

It is safe to suppose that a major purchase would include something as basic as a car, and that an unexpected major expense would include a long illness. So, it is a powerful irony that so many Americans believe that they could go broke on incomes that are just below the national average household income of $51,000.

The federal government sets poverty thresholds at various levels based on family size. The threshold for a family of four is $23,021. So, put simply, based on Gallup’s data, Americans who can live on $24,000 a year sit just above the level at which people are considered abjectly poor.

One has to wonder if the $24,000 threshold would have been nearly as low in 2007, before the economy was gutted and unemployment was well above 15%, when people who work part time but would like to work full time and those who gave up on finding work were included. Whatever equity these people had in real estate likely was demolished. In many cases, hope for social advancement, base on income at least, was extinguished.

The data leads to one other conclusion, which is that the economic recovery will hit its limits as people who make more than $48,000 run through the portion of their incomes devoted to discretionary spending. At some point, for a portion of these people, their major purchases or unexpected expenses will exhaust their annual incomes. They largely will disappear as consumers, as far as economists are concerned. That leaves fewer and fewer people to fuel GDP recovery.

When so many Americans feel that they have adequate incomes at $24,000, the country has reached a level where aspiration has been overwhelmed by the years in which the economic recovery has not reached down to the lower income classes. 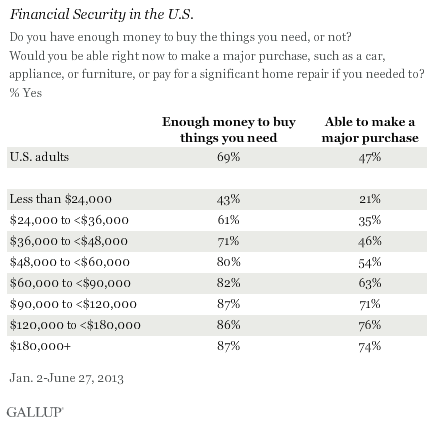 Methodology: These results are based on telephone interviews conducted Jan. 2 to June 27, 2013, on the Gallup Daily tracking survey, with a random samples of between 21,958 and 22,159 adults, aged 18 and older, living in all 50 U.S. states and the District of Columbia.