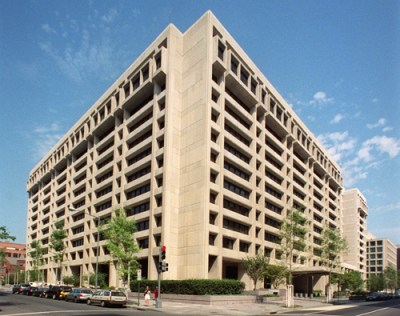 Source: By International Monetary Fund [Public domain], via Wikimedia Commons
Barely buried in the new International Monetary Fund (IMF) forecast for global growth was the prediction for U.S. gross domestic product (GDP) improvement for 2013 and 2014. As the world’s largest economy, the United States has an outsized effect on the IMF’s number. American GDP recovery is expected to be bad, so if it is better than the IMF forecast, it will cause a better world — financially.

The IMF revised its GDP improvement figures down. In its World Economic Outlook the agency made the point:

Global growth is now projected at 3.1 for 2013 and 3.8 percent for 2014, a downward revision of ¼ percentage point each year compared with the forecasts in the April 2013 WEO.

Growth in the United States is forecast to rise to rise from 1¾ percent in 2013 to 2¾ percent in 2014, as fiscal consolidation slows and private demand remains solid.

In addition to being poor English, the statement reflects a U.S. improvement much below what many economists and government agencies expect. In the administration’s just released Mid-Session Review for the government’s fiscal 2014 Office of Management and Budget forecast:

Given the size of the U.S. economy, the difference between the forecasts is stupendous. America’s current GDP, which is well above $15 trillion, is as almost as large as the combination of the nominal GDPs of the next three countries by the measure — China, Japan and Germany.

The focus of the IMF’s revision has been the slowing of growth among the emerging nations, according to one of the most visible comments in its revised forecast:

But that focus obscures the real trigger for 2013 and 2014. If the United States beats the IMF estimates, the global number will be much higher.

Europe's Inflation Is on Fire