Source: Thinkstock
When Christine Lagarde of the International Monetary Fund (IMF) spoke last week, it had all the hallmarks of a precursor to a downgrade of the IMF’s global growth targets. Now we have a confirmation that the IMF did in fact downgrade its global growth views ahead in the October version of the World Economic Outlook.

There actually may be some good news here despite the direction of the move. Global GDP growth is moderate and uneven, and the new IMF forecast is for global GDP growth of 3.1% for 2015 and 3.6% in 2016. That growth was 3.4% in 2014. Again, think of the severity (or lack thereof) rather than the direction and think about those numbers versus how the markets were reacting to slowing economic numbers in August and September.

A focal point of the IMF, as you would expect, is that there are disparate fortunes between the advanced and emerging market and developing economies. The other point made was that lower commodity prices are weighing on commodity exporters — a move that may not end any time soon.

Three forces were cited for the formal growth downgrade:

ALSO READ: The Best and Worst Economies in the World

The IMF noted that the recovery in advanced economies is staying its course. It said:

Growth in advanced economies is projected to increase modestly to 2 percent this year and 2.2 percent next. This year’s pickup reflects primarily a strengthening of the modest recovery in the euro area and a return to positive growth in Japan, supported by declining oil prices, accommodative monetary policy, and improved financial conditions, and in some cases, currency depreciation… While growth is expected to increase in 2016, especially in North America, medium-term prospects remain subdued, reflecting a combination of lower investment, unfavorable demographics, and weak productivity growth.

Weaker oil export from oil nations, the woes of China, Latin American weakness and geopolitical tensions and domestic strife in a number of countries were all also noted for a slower global growth story. The IMF said:

External conditions are becoming more difficult for most emerging economies. The prospect of rising U.S. interest rates and a stronger dollar has already contributed to higher financing costs for some borrowers, including emerging and developing economies. And while the growth slowdown in China is so far in line with forecasts, its cross-border repercussions appear larger than previously envisaged, including through weaker commodity prices and reduced imports.

The projected rebound in growth in emerging market and developing economies in 2016 therefore reflects not a general recovery, but mostly a less deep recession or a partial normalization of conditions in countries in economic distress in 2015 (including Brazil, Russia, and some countries in Latin America and in the Middle East), spillovers from the stronger pickup in activity in advanced economies, and the easing of sanctions on the Islamic Republic of Iran.

Growth in low-income developing economies is expected to slow to 4.8 percent in 2015, from 6 percent in 2014, in large part due to weak commodity prices and the prospect of tighter global financial conditions. Some countries (e.g., Kyrgyz Republic, Mozambique) have been running large current account deficits, benefiting from easy access to foreign savings and abundant foreign direct investment, especially in resource-rich countries, and hence are particularly vulnerable to external financial shocks.

Frankly, none of this should be surprising to anyone who has been paying attention to the financial media or to readers of 24/7 Wall St. Our piece titled IMF Tips Hand on Lower Global GDP Forecast should have pretty much said all that needed to be said.

Another consideration, a problem that has existed with the other economic watchdog groups (including our own Federal Reserve), is that everyone’s global growth targets seem to have been too high routinely. 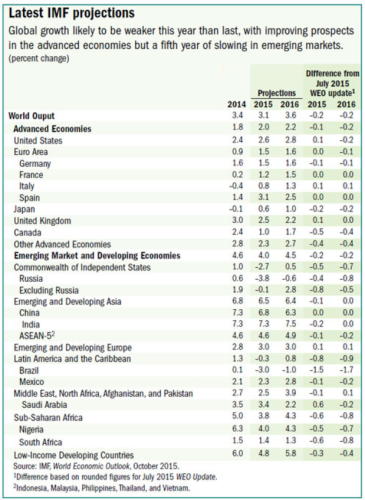