Credit Availability and Conditions Continue to Improve in July

Source: Thinkstock
We have yet another economic report this Thursday. This was a report from the National Association of Credit Managers (NACM). You can guess what they track — credit availability, accessibility and performance trends. The July NACM Credit Managers’ Index showed an improved confidence and rose to 56.8 from 56.1 in July. For those who are not familiar with the NACM, it supports more than 15,000 business credit and financial professionals worldwide with services, tools and information.

Thursday’s report is far from stellar, but it does show a continued improvement in credit conditions and availability.

A combined quote from the NACM described July by saying:

The overall sense is that real progress in economic recovery is being made and the future looks brighter. But, not to rain on the parade, these numbers also looked good at the start of the year, and it has taken until mid-summer to regain that momentum. Winter weather was partly responsible for this struggle, as was the significant decline in exports of American goods. The rebound in exports played a major role in getting the US back to growth, but the caution is that many of those importing nations are still not in very good economic shape… The CMI has joined this parade with a set of readings that mark highs not seen in over a year in some cases. Given that the CMI is often predictive, it would appear that economic conditions for the coming months will continue tracking in a positive direction.

A full table and data has been provided in the graphic below from the NACM. 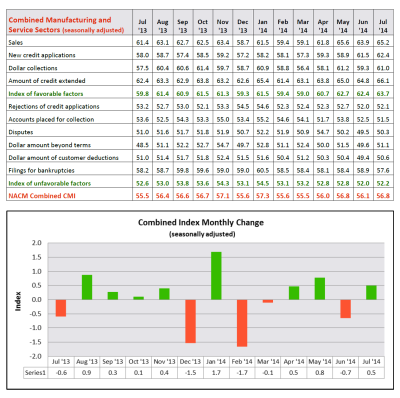