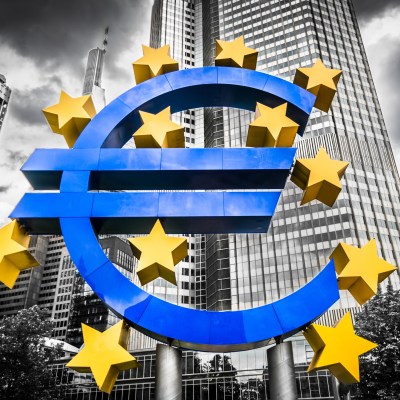 Source: Thinkstock
If there is one thing that central bankers and politicians have proven over and over since the Great Recession, it is that they will do almost whatever they can get away with to steer the economy and the financial markets higher. After the United States embarked on quantitative easing, Japan and Europe have both followed suit with their own quantitative easing measures. And now it appears as though even more quantitative easing is coming quite soon from Europe.

The European Central Bank (ECB) left its key interest rates unchanged earlier on Thursday. The deposit rate remained at -0.20%, and they left the more public refinance rate at 0.05%. The United States is not alone in a zero-rate policy.

What drove markets higher on Thursday were comments from ECB President Mario Draghi signaling that he is ready to embark on even more economic stimulus. The next meeting is in December. That means that December and 2016 could be full of even more quantitative easing than the markets had expected.

The driving force behind the stock market games on Thursday is that Draghi stressed downside risks to economic growth and to inflation. These are arising from slower growth in China, as well as from week commodity prices. That of course is very weak oil and energy prices.

Draghi also said that the degree of monetary policy accommodation will need to be revisited at the December policy meeting. At that time new projections will be available. If that does not sound as though more quantitative easing is on the way, then what does?

Banks are already paying to keep excess deposits at the central bank, hence the -0.20% deposit rate. It has so far not been seen that the ECB’s bond purchase program of billions per month has done much to spur inflation. Inflation remains an elusive figure, and central banks around the world have not yet resorted to buying up oil and commodities — and we know they cannot print those out of thin air.

SEE ALSO: The Best and Worst Economies in the World

Nevada Has the Most Fraud