Continued improvements in labor force participation rates in the next few months will be crucial to determining whether recent progress constitutes merely a rebound from a cyclical low or an actual reversal of the downward trend—a distinction that is critical to long-run growth and current macroeconomic policymaking.

Labor force participation of workers 16 and older in the United States has steadily declined since the turn of the century, from just above 67 percent to a low of below 63 percent. Coming on the heels of a decades-long increase in participation, fueled by the entry of many women into the workforce, this decline has concerned many economists and policymakers who recognize the close link between labor force participation and economic growth.

Much of the post-2000 decline is attributable to population aging: an increasing share of Americans are senior citizens. But even when focusing on those between the ages of 25 and 54, the labor force participation rate had declined by more than three percentage points from 2000 to 2015. Men and women experienced remarkably similar declines during this period. Prior Hamilton Project analysis documented the fall in participation across women of all demographic groups, noting the departure from trends seen in other major economies (Japan being the most striking example).

However, after unemployment reached low levels in September 2015, U.S. prime-age labor force participation has sharply rebounded. Both women and men have experienced considerable increases in their prime-age participation rates (see figure 1), though women’s rebound started earlier and has been somewhat larger. The changing age distribution within the 25- to 54-year-old group has contributed slightly to the rebound, adding 0.1 percentage points since 2015. 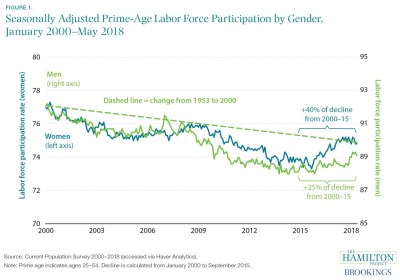 What does this recent increase mean for estimates of the trend in participation? Should the 2015–18 rebound cause researchers to reevaluate their assessment of the long-term downward trend in labor force participation?

Separating the post-2008 decline into the short-run effect of the recession and the long-run trend decline is the focus of an active debate, with most estimates suggesting considerable uncertainty about this decomposition. The fact that there has been a sizable rebound in the last three years as the labor market has healed suggests a large portion may have been due to the recession. Even the decline since 2000 may be in part due to a weak labor market, as the recovery from the 2001 recession was weak and the Great Recession began before a full recovery of the labor market.

As the labor market has tightened—the national unemployment rate now stands at an unusually low 4.0 percent—employers have become eager to find workers, drawing many away from the sidelines of the labor market. The overall participation rate for workers 16 and older is largely back to pre-crisis levels after adjusting for demographic shocks, but in part this is due to an increase in participation by older workers (consistent with improved health and longevity as well as changes to Social Security rules).

Prime-age labor force participation, though, is still below both the 2007 level and the long-run trend. This suggests there may still be some room for participation to continue to increase based on cyclical factors alone. And, as noted, women’s participation has been rising in other countries, suggesting female prime-age participation may have more room to climb as well.