If there’s anything that chief executive officers dislike more than taxes, it’s government regulation. Among the top threats to businesses in 2018 was an increasing tax burden, ranking number eight. Taxes don’t even make the top 10 this year. But over-regulation topped the list again in 2019, as it did in 2018 and has every year since 2008, when it was first among the survey choices.

The 2019 CEO survey is the 22nd annual PricewaterhouseCoopers (PwC) global survey of 1,378 chief executives in more than 90 territories. For the first time this year, PwC included policy uncertainty and trade conflicts on its list of threats to business and, no surprise here, both made the top 10.

Another unsurprising result: in 2018, climate change and environmental damage made the list at number eight, with 31% of CEOs calling it a threat. In the 2019 survey, climate change fell to 13th and just 19% of CEOs see it as a threat to business.

One more big change: terrorism fell from number two in PwC’s ranking last year to 23rd this year. As PwC notes, “threats that are top of mind are less existential and more related to the ease of doing business. … Top of mind among CEOs’ concerns is what dominates the headlines.”

So, what are the headlines telling CEOs? Here’s how CEOs rank the top 10 threats to business in 2019. To make the list, the threat had to be one about which a CEO was “extremely concerned.”

More than a third of CEOs (35%) view over-regulation as the top concern. It ranked at the top in Western Europe, second in Latin America and third in Africa. It did not make the top three concerns in North America or Asia-Pacific.

In its first year on the list of choices, policy uncertainty actually tied with over-regulation as the top concern. It is among the top 10 in all regions and ranks in the top three in every one except North America, where it ranks seventh.

Just over a third of CEOs (34%) rank this as their top concern. It is the top concern in Central and Eastern Europe, and it is the second in Asia-Pacific and Africa. This issue is on the top 10 list of every region.

The other new choice on the 2019 list. Some 31% of CEOs are concerned about trade conflicts, with the disputes between the United States and China perhaps leading the way. This is the top concern of Asia-Pacific CEOs and ranks second in North America.

Cybersecurity retained its fifth-place ranking in 2019, but the percentage of CEOs who said this was extremely concerning dropped from 40% to 31%. This is the top concern in North America and is second-ranked in the Middle East.

This concern ranked third in 2018 with 40% of CEOs seeing geopolitics as a major issue. The percentage dropped to 30% this year and is the number one concern in the Middle East and the second-ranked concern in Central and Eastern Europe.

Some 28% of all CEOs surveyed list populism as a major concern. As PwC notes, “Government actions under new populist regimes have taken centre stage and are of more immediate concern than shifts in global temperature.” This was the top concern in Latin America and ranked second in Western Europe.

Technological change is a top concern for 28% of CEOs, down from 38% a year ago. Notes PwC, “Data about customer preferences and needs remains the most valuable, followed by financial forecasts, then data about brand and reputation, business risks, and employee views and needs — the same top five with virtually the same percentages as ten years ago; the only slight differences are in rank order.”

Although this concern did not make it into the top three of any region, it still ranks in the top 10 with 26% of CEOs concerned about exchange rates, down from 29% a year ago.

The full report and detailed methodology are available on the PwC website. 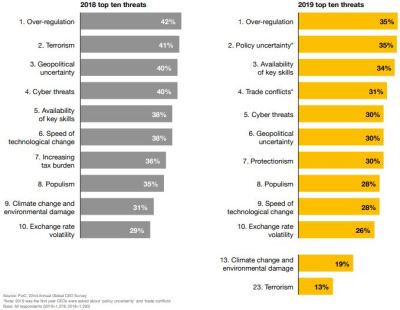 COVID-19: This State Has the Most People in Hospitals