Retirement Shock: It's Worse Than Social Security Going Broke in 2035

There has been a longstanding concern, some mythical and some based on math, that there will be no Social Security for retirees in the future. While this is not entirely true, there is a new forecast from the Social Security showing when that may start to occur. The current forecast is that 2035 will be the year that Social Security’s current $2.9 trillion in reserves will be depleted. Sadly, the math for supplemental retirement funding by the government starts getting bad far sooner.

While this may seem way off with 16 years to rectify, the trustees have a much more pressing time in 2020 as the year in which Social Security’s expected payouts will exceed its income. That would mark the first such year its income and expenses have been inverted since 1982.

The 2019 OASDI Trustees Report, which is officially called the 2019 Annual Report of the Board of Trustees of the Federal Old-Age and Survivors Insurance and Federal Disability Insurance Trust Funds, has some stark figures.

Social Security’s total cost is currently projected to be less than that of its total income in 2019, but that cost will start to be higher than total income in 2020 and all years thereafter. The next decade will see large reserve declines as well, as projected reserves are forecast to decrease drop from the latest $2.895 trillion to $2.148 trillion by the end of 2028. The ratio of reserves to annual cost is now forecast to fall from 273% at the start of 2019 to 130% at the beginning of 2028.

The OASDI program is made up of two groups. The first is the group of retired workers, their families and survivors of deceased workers who still receive monthly benefits under the Old Age and Survivors Insurance (OASI) program. The second group is the disabled workers and their families who receive monthly benefits under the Disability Insurance (DI) program.

At the end of 2018, the OASDI program was making benefit payments to about 63 million people. That is broken down as 47 million retirees and their dependents, another 6 million survivors of deceased workers and about 10 million disabled workers and dependents of disabled workers. Also in 2018, there were an estimated 176 million people who had earnings covered by Social Security and paid payroll taxes on those earnings. The total cost of the program covering 2018 was $1.000 trillion, versus total income to the fund of $1.003 trillion. The asset reserves held in special issue U.S. Treasury securities grew to $2.985 trillion at the end of 2018 from $2.892 trillion at the start of the year.

There is a further breakdown of these years of depletion in the Social Security Administration report. The OASI Trust Fund reserves are projected to become depleted in 2034, while the DI Trust Fund reserves will become depleted in 2052. As far as how this compares to the prior year’s report, the projected reserve depletion years a year ago were 2034 for OASDI, 2034 for OASI and 2032 for DI.

The Social Security Administration outlines how the baby boom generation’s large representation will play out compared with subsequent generations. The report said:

Projected OASDI cost increases more rapidly than projected non-interest income through 2040 primarily because the retirement of the baby-boom generation will increase the number of beneficiaries much faster than the number of covered workers increases, as subsequent lower-birth-rate generations replace the baby-boom generation at working ages. From 2040 through 2051, the cost rate (the ratio of program cost to taxable payroll) generally declines because the aging baby-boom generation is gradually replaced at retirement ages by subsequent lower-birth-rate generations. Thereafter, increases in life expectancy cause OASDI cost to increase generally relative to non-interest income, but more slowly than between 2010 and 2040.

The Social Security’s 2019 OASDI 270-page report outlines how deferring substantial actions for just several years means that Social Security’s solvency would be concentrated on fewer years and fewer generations. As far as the magnitude of how the 75-year actuarial deficit would have to play out to get back on track so that the combined OASI and DI trust funds would remain fully solvent over the 75-year projection period, the following projections were made:

There is also one aspect that goes far beyond the mere “who pays what” argument. Most people don’t want to pay more in taxes, and most people don’t want to lose retirement income benefits. While that’s a given, there is a graph below from the report that shows what used to be more than three workers making contributions per one beneficiary. That level has ticked down since 2009, but it is expected to reach a closer to a ratio of just two workers per beneficiary in the decades ahead. Each worker is going to have a lot of mouths to feed.

It has been a longstanding notion that a day of reckoning will have to come when it comes to “fixing” Social Security. Unfortunately, when few people want to pay more in taxes and when people want lower permanent benefits, there are no good answers here. It is quite clear that this Social Security conundrum will be an ongoing debate in politics for far longer than just the 2020 election.

24/7 Wall St.
The 15 Best Dividend Stocks for Retirees to Own 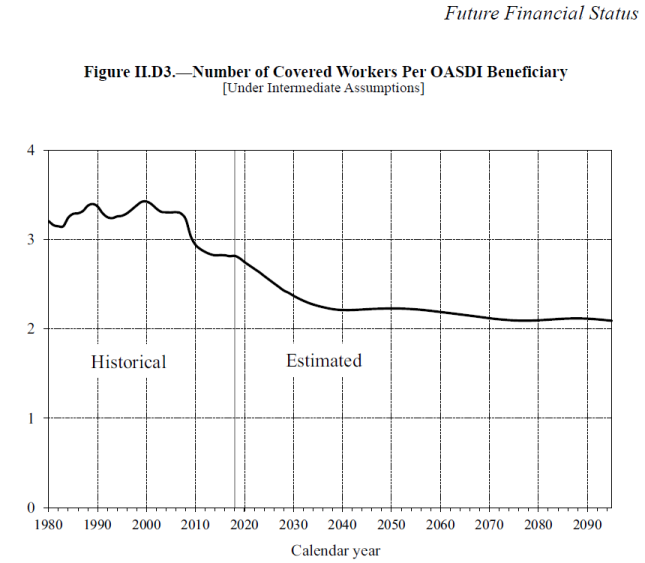