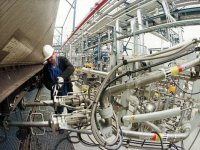 The chemicals industry is not ordinarily thought of as action central, but there have been some recent moves, including one today, that are stirring things up. Two private equity firms, First Reserve Capital and SK Capital Partners, today agreed to pay $628 million in cash for TPC Group Inc. (NASDAQ: TPCG), a maker of butadiene which is used extensively in the manufacture of synthetic rubber.

In June, Cabot Corp. (NYSE: CBT) paid $1.1 billion for a Dutch chemical maker and in January Eastman Chemical Co. (NYSE: EMN) paid $4.7 billion for Solutia Inc. The Dow Chemical Co. (NYSE: DOW) is still feeling the effects of its $16.2 billion merger with Rohm and Hass and is reportedly seeking a financing package worth $6.2 billion to prop up its end of a joint venture with Saudi Arabian Oil Co. called Sadara Chemical Co. Finally, another major chemicals maker, E.I. duPont de Nemours and Co. (NYSE: DD) is looking for an acquisition to beef up its position in India.

There’s a little rain falling on the parade today, though, with two downgrades of chemical companies from UBS. Westlake Chemical Corp. (NYSE: WLK) was cut to ‘sell’ and LyondellBasell Industries (NYSE: LYB) was cut to ‘neutral’ on what the bank sees as rising costs for natural gas feedstocks in the second half of this year. Natural gas provides the fuel to run the chemical cracking plants as well as being a source for ethane, which is used to make a wide variety of plastics and other products.

The three largest U.S. natural gas producers Exxon Mobil Corp. (NYSE: XOM), Chesapeake Energy Corp. (NYSE: CHK), and EOG Resources Inc. (NYSE: EOG) have been trying to raise natural gas prices this year as a glut of production pushed the price as low as $1.90/thousand cubic feet in April. The price has recovered to around $2.80 today, but an expected rise in natural gas prices due to production cutbacks is likely to chop margins at Westlake and LydondellBasell.

UBS expects ethane prices to rise by 67%, from $0.30/gallon to $0.50/gallon by year’s end. Ethane is component of natural gas, but it must be separated and chilled at gas processing plants. It cannot just be cracked like other gases or liquids that flow out of the ground at a natural gas well.

Westlake is probably lucky that its attempt at a hostile takeover of rival Georgia Gulf failed earlier this year. Westlake’s $1.2 billion offer was dropped in May and then Georgia Gulf struck a deal with PPG Industries Inc. (NYSE: PPG) to form a new chemicals company combining PPG’s assets with Westlake. That deal was worth $2.1 billion for Westlake shareholders.

A Wall Street Journal story in June named a number of other possible private equity deals or acquisitions by chemical firms wanting either to shed “non-core” assets or to diversify by adding another piece of the chemicals business.

It pays to look closely, though. Before Cabot announced its acquisition of the Dutch firm shares traded at $36.51. Today the shares are down to $35.27 following a rise to more than $41 about two weeks after the deal was announced.