What to Expect From Exxon, Chevron Q1 Results

Just three months ago, Exxon Mobil Corp. (NYSE: XOM) was expected to post first-quarter earnings per share (EPS) of $0.72. As of Thursday morning, the consensus estimate calls for a breakeven quarter.

The story is virtually the same at Chevron Corp. (NYSE: CVX), where the consensus estimate for EPS has dropped from $1.66 to $0.69.

The front-month futures contract for West Texas Intermediate (WTI) crude oil has plunged by more than 70% since the beginning of the year, and that follows recovery from a dive to a negative price of $37.63 a barrel. The U.S. energy industry is suffering, and the country’s two giants are taking a beating as well.

Here’s a look at how Exxon’s and Chevron’s share price has been tracking the price of WTI and Brent, the international benchmark. 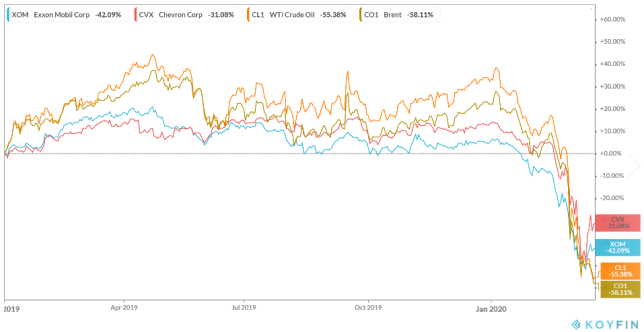 Thursday morning, Exxon announced it would pay its regular $0.87 per share dividend in June, the first time in 13 years that the company has not raised its dividend in April. Chevron also announced that it will pay its $1.29 quarterly dividend again in June. Chevron raised its quarterly dividend by 10 cents a share in the first quarter of this year. BP PLC (NYSE: BP) also said it would maintain its $0.105 quarter dividend for now.

Not every giant is following in these footsteps. Royal Dutch Shell PLC (NYSE: RDS-A) announced it is slashing its quarterly dividend from $0.47 to $0.16, the first time the Anglo-Dutch giant has cut its dividend since the end of World War II. Equinor ASA (NYSE: EQNR), Norway’s state-controlled energy company, slashed its quarterly dividend from $0.27 to $0.09 earlier this week.

Exxon and Chevron both have solid balance sheets and may be able to get through the COVID-19 pandemic with their dividends intact. BP probably didn’t cut its dividend because it just raised it in February. Shell’s cut puts about $10 billion back into the company’s balance sheet.

In addition to chopping its dividend, Equinor also suspended buybacks, issued a $5 billion bond and instituted a plan to cut $3 billion from costs as it tries to become cash flow neutral before distributing capital this year.

When Exxon reports first-quarter results Friday morning, analysts are expecting the company to breakeven on revenues of $51.85 billion, a drop of 18.5% year over year. Chevron is forecast to post $0.69 in EPS on sales of $29.38 billion, a 16.5% decrease.

Free cash flow in the first quarter could be negative for both firms, and the second and third quarters are likely to be even worse. Investors will be waiting to hear more about the cash outlook for both companies on Friday’s conference calls.

ALSO READ: 15 Strong Stocks With Rising Dividends Despite the Recession
Get Our Free Investment Newsletter