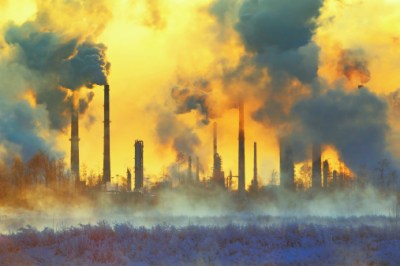 Government globally subsidizes consumers’ energy costs by a total of $5.3 trillion, about 6.5% of global GDP and more than the gross domestic product of all but the world’s largest two economies, the United States and China. The total is also likely to be higher than global spending on health care, which amounted to an estimated 6% of global GDP in 2013. The energy subsidy estimate reflects the 2015 total.

The energy subsidy costs were reported on Monday by the International Monetary Fund (IMF), which defines energy subsidies as “the difference between what consumers pay for energy and its ‘true costs,’ plus a country’s normal value added or sales tax rate.” The “true costs” of energy include supply costs and the damage that energy consumption “inflicts on people and the environment.” The damages come from carbon emissions and global warming. The IMF says, “Most of these externalities are borne by local populations, with the global warming component of energy subsidies only a fourth of the total.” Here’s the IMF chart: 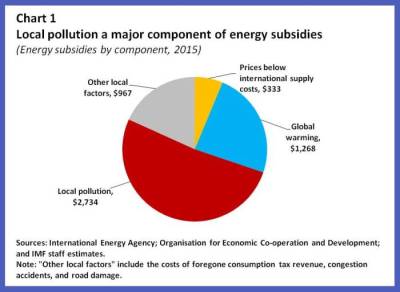 ALSO READ: The Happiest (and Most Miserable) Cities in America

The new total subsidy estimate is more than double the 2011 estimated total of $2 trillion, and the IMF said that more than half the increase “is explained by more refined country-level evidence on the damaging effects of energy consumption on air quality and health.”

The IMF has long argued that getting energy prices right can help national governments achieve their goals not only for the environment but also for inclusive growth and sound public finances. Increasing energy prices gradually and predictably to reflect their true costs would generate fiscal gains of about 3½ percent of GDP. The fiscal gains are less than the total amount of subsidies (6½ percent of GDP) because higher prices would drive down energy consumption.

The IMF also notes that “there would be appropriate incentives for incentives in green technology because dirty energy would no longer be artificially cheap.”