Freddie Mac vice president and chief economist Frank Nothaft noted in a statement that the modest but inconsistent movements in rates — some up, some down — came during a week of little real rate-moving economic news: “Of the few releases, real GDP was revised down to -1.0% growth in the first quarter of 2014. ADP Research Institute estimated the private sector added 179,000 jobs in May, which followed a slight downward revision of 5,000 jobs in April. Meanwhile, the Institute for Supply Management reported the manufacturing industry saw a slight acceleration in monthly growth for May.”

On balance, the limited news is probably a slight negative for the economy. If things get worse, expect rates to resume their downward slide. 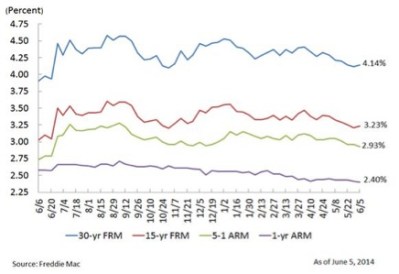