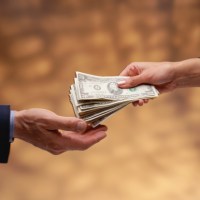 Source: Thinkstock
With the stock market reaching new heights daily, companies’ profit margins at multi-decade highs, and falling unemployment, many Americans may be wondering when they will start to see the benefits of the U.S. economic recovery. For many workers, wages have remained stagnant even as the economy is making positive strides.

A number of America’s most successful companies employ large numbers of low-wage workers. These workers are hired to staff stores, call centers, and restaurants. These workers are typically paid hourly, and oftentimes earn little above the federal minimum wage of $7.25 per hour. Oftentimes, these employees serve as the face of their companies and spend most of their workday interacting with consumers.

Not all employees at these companies are paid modest salaries. While customer account executives at Comcast earn $13.26 per hour on average, according to Glassdoor.com figures, stars of the company’s NBC television network shows were paid hundreds of thousands if not millions of dollars a year. And while the average attractions cast member at Disney’s parks and resorts earned just $16.39 per hour, Disney also employs far higher-paid workers at its ABC and ESPN television networks.

Recently, a number of these companies have chosen to use their resources for massive deal making. In February, Comcast announced a deal to acquire Time Warner Cable for $45.2 billion in stock value. In May, AT&T agreed to acquire DirecTV for $48.5 billion. Regulators have yet to approve the deals. Last year, Verizon signed on to an even bigger deal when it bought out British telecom Vodafone’s 45% stake in Verizon Wireless for $130 billion.

Of course, companies may not necessarily have an obligation to pay their employees a higher wage. If the recent spate of mega deals is any indication, companies can spend huge amounts to help provide better returns to their shareholders.

However, many argue that companies still spend too much in executive compensation. Comcast chairman and CEO Brian Roberts earned more than $31 million last year in salary, stock options and awards, and other benefits. Bob Iger, CEO of Disney, received more than $100 million in total compensation from 2011 through 2013. Outsized salaries like these appear especially disproportionate when compared to low-wage workers.

Based on data provided by Capital IQ on S&P 500 companies, 24/7 Wall St. identified corporations with high operating income, high operating profit margins, and major one-year growth in operating income. In order to be considered, companies had to be in a customer-facing industry and have a large number of low-wage workers. We excluded financial companies, such as banks and thrifts, because the data we used to measure profitability is inadequate for judging the industry’s performance. Employee totals by company are from Yahoo! Finance. CEO pay is from filings submitted by public companies with the Securities and Exchange Commission. Figures on compensation are from Glassdoor.com and are self-reported by users to the website.