Expanding U.S. trade and investment in infrastructure, clean energy and energy efficiency could rebalance the U.S. trade deficit with the rest of the world and create at least 6.9 million new, good-paying jobs, according to a new report out Tuesday from the Economic Policy Institute (EPI).

The report’s authors outline a two-pronged strategy to rebuild the domestic economy: reducing the valuation of the U.S. dollar and rebuilding the “competitiveness of U.S. manufacturing industries and, second, investing $2 trillion over four years in improvements to infrastructure, clean energy, and energy efficiency.

Of the 6.9 million jobs created, about 36% (2.5 million) would be manufacturing jobs and about 471,000 (6.8%) would be construction jobs. Another 2.1 million jobs (30% of the 6.9 million total) would create high-wage jobs for Americans who don’t have a college degree. These include jobs in areas such as nonelectrical machinery, fabricated metal products, transportation equipment, electrical equipment, primary metals, motor vehicles and parts, aerospace, and steel.

Every state and the District of Columbia would benefit from the investment stimulus, with Wisconsin, North Dakota, Indiana, Iowa and Wyoming getting the largest percentage job increases.

At least one part of the EPI report is moving in the authors’ desired direction. The U.S. dollar’s role as the dominant global reserve currency has been weakening as dollar-denominated sovereign debt has lost some of its appeal as the dollar’s share of global foreign exchange reserves has declined from around 65% in the third quarter of 2016 to about 61% in the second quarter of this year. The overall effect is to lower the price of U.S. goods and services imported into other countries.

The $2 trillion investment the authors suggest is divided into four equal tranches of $500 billion and that amount is divided equally on infrastructure and renewable energy programs. Surface transportation (e.g., roads, bridges) snags nearly $106 billion of the $500 billion allocated for annual infrastructure improvements while wind and solar projects would receive $84.4 billion each.

The full EPI report is available on the organization’s website and includes details on methodology and analytical tools. The following table from the report shows the effect on job creation of rebalancing U.S. trade and investing in clean energy/energy efficiency in each state and the District of Columbia. 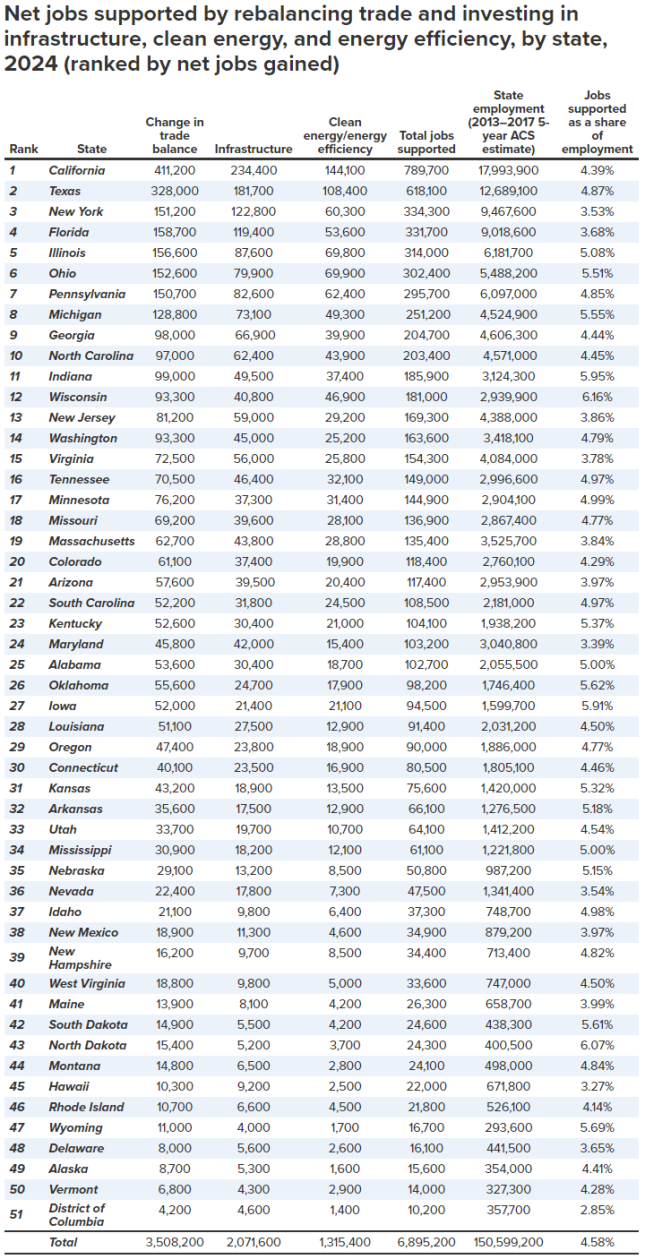 This State Has the Worst Highways in America

This American City Has the Highest Utility Bills

These Are the Countries With the Worst Traffic Jams