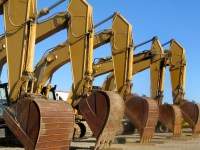 America’s core infrastructure is falling apart.  Roads are sinking, bridges have collapsed, dams are old, power plants and the power grid are substandard, rail systems are ancient, the levees are ancient as are sewerage systems.  The ‘Rebuild America’ bond program has so far done nothing more than contribute a down payment on a decade-long process that could reach well above the “billions” in total funding.

24/7 Wall Street has decided to take a look at the biggest companies which will lead in the rebuilding of America’s ailing infrastructure.  A recent report from Infrastructurereportcard.org gave the United States a grade of a “D” and said that the 5-year investment need was $2.2 trillion. What the real tally is may not matter, but America has to rebuild.

In October, Amtrak rolled out a $100+ billion plan to rebuild its network.  President Obama is expected to call for a transportation infrastructure plan in the coming weeks. Finding all of the nation’s infrastructure winners is too long and too daunting of a task. General Electric and many of the nation’s largest diversified companies are all beneficiaries, and some of the key winners are likely to be foreign entities which employ thousands of workers in America.

The companies featured are the ones behind the design, testing, manufacturing, consulting, engineering, and construction of major projects.  We wanted players that will rebuild the water systems, roads, highways, bridges, airports, rail, levees, waterways, utilities, and buildings around the major infrastructure projects ahead.

These are the companies that 24/7 all Street is most focused on for the American infrastructure revival.

1. AECOM Technology Corporation (NYSE: ACM) offers architecture and engineering design services.   Target markets are transportation, environmental, energy, and it serves projects in key infrastructure areas like highways, airports, bridges, wastewater facilities and power transmission and distribution.  AECOM has a market value of about $3.5 billion and it is expected to have 2011 revenues of close to $8.4 billion. It as 50,000 employees.

2. Chicago Bridge & Iron (NYSE: CBI) is technically Dutch now but is a key infrastructure player with 16,000 employees worldwide that executes more than 600 projects a year with a focus in oil & gas infrastructure, steel plate structures in storage and containment and plant manufacturing.  The company has a market value of more than $3.3 billion and it recently forecast that 2011 revenues are expected to reach $4.3 billion to $4.7 billion.  If America is going to get serious on its energy infrastructure ahead, CB&I stands to greatly win.

3. Emerson Electric Co. (NYSE: EMR) might sound like an electric utility but it is in engineering and project management services for many industries and many government agencies.  It manufactures major equipment for utilities and industry, power and telecom, heating and air-conditioning, network power, climate technologies, and more.  It also has well over 100,000 employees.  The company has a market value of roughly $44 billion and it just recently gave a forecast of 14% to 17% growth to $24 to $24.5 billion in 2011 revenues.