The 10 Worst Places For Women To Work

Women make up over 50% of the US workforce now, but the Bureau of the Census shows that women make, on average, only 77% of what men do based on measurements of annual salaries.
24/7 Wall St. looked at research about the Fortune 500 to find the worst places for women to work. The data used is from Catalyst, a non-profit organization which works to promote the status of women in business. Our analysis compared the Fortune 500 women who are executive officers as defined by the SEC to data on the number of female members of boards of directors at the same universe of companies. This is the first time these two lists have been cross-referenced for a public analysis.

The companies on the 24/7 Wall St. Worst Places for Women to Work list have no women on their boards and no women in senior management.  Any company on the list would have to: 1) completely lack sensitivity to the issues of women in the work place, or 2) have enough misgivings about women to insure that all the people who have any meaningful place in running their companies have to be men. It is hard to say whether these companies are “female-free” at the top tiers because of misogyny or dull-wittedness.  The practice of equal opportunity is missing at all of these companies.

Our analysis makes an assumption, but we believe it is a fair one. A company with no women on its board or in senior management is extremely unlikely to be concerned about the issue of disparity in pay by gender  and is likely to perform worse than the national census average in terms of what it pays its non-executive female management and its women rank-and-file employees.

1. Phillip Morris (PM) is one of the largest tobacco companies in the world and has nearly 75,000 employees. Women are often assigned to run human resources and corporate communications departments at companies where men dominate the management, and PM is no exception. The highest ranking corporate executive is Daniele Regorda, vice president of human resources. Phillip Morris claims that the company is “always striving to broaden the diversity of our workforce and are continuously working to identify, hire and retain the best qualified individuals, wherever they are located or whatever their background.” No wonder they call him the Marlboro Man. Nine board members, zero women. 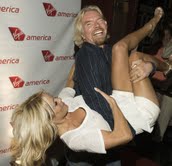 3. Virgin Media (VMED) is in the mobile telephone and broadcast business, and has 13,380 employees. Virgin is based in the UK and is part of the Richard Branson collection of companies. Branson is a media star among global corporate chiefs. The firm has 11 directors, all of which are, you guessed it, men. The senior female member of the Virgin Media management is Elisa Nardi, Chief People Officer, or head of human resources.

4. Liberty Media (LINTA) has a $7.7 billion dollar market value.  This part of cable and content king John Malone’s empire has about 19,000 employees and holds a number of satellite broadcast and content assets including assets in QVC, Starz, and Expedia. The company has nine directors including Malone. No women executives are listed at the corporation’s website.

5. L-3 (LLL) Holdings provides military technology and employs 66,000 people. It is the sixth largest defense company in the United States. L-3 as nine directors. There are no women in executive management but the head of employee benefits and general counsel are both women. It is almost impossible to understand why the federal government would sanction this.

6. EOG Resources (EOG) is an oil and natural gas company with 2,100 employees and a $23 billion market cap, which makes it one of the most valuable firms in its sector. The head of human resources and administration and the head of accounting are women.

7. Cameron International (CAM) provides equipment for the national gas and oil industries. The company has 17,000 employees, eight board members, no women in positions of major responsibility. Seven senior executives are listed in the proxy–all male. Also, all board members but one are over 60–a sort of reverse age discrimination.

8. National Oilwell Varco (NOV) is an oilfield services company which provides mechanical components for oil and gas drilling projects. About 40,000 employees. Eight directors, none of which are women.

9. Emcor (EME) is an electrical and mechanical construction and facilities services company with 28,000 employees. The only female corporate executive is the head of corporate communications, and she is not considered “senior management” as the SEC defines the term.

10. XTO Energy (XTO) has 3,100 employees and a market cap of $27 billion. The firm prides itself on its ability to find and import oil and natural gas.  Apparently, they aren’t quite as concerned about scavenging for corporate gender diversity.

Honorable mention: Shaw Group (SHAW) is a diversified manufacturing company has nearly 28,000 employees. Its market cap at $3 billion is relative small. They have no female officers or directors either.