Debt per Capita: $8,973 (38th)
Unemployment Rate: 8.4% (25th)
Home Price Change (’06 – ’09): 9.8% (17th)
Median  Household Income: $56,860 (10th)
Falling just short of our top ten overall meta rankings, Delaware does fall within the top ten best in median household income, health insurance, and percentage of people below the poverty line. The “first” state also ranks first in GDP per capita. However, it suffers from one of the worst violent crime rates in the country (47th) with 706 violent crimes committed per 100,000 people each year.

Debt per Capita: $6,459 (16th)
Unemployment Rate: 4.5% (2nd)
Home Price Change (’06 – ’09): 12.1% (11th)
Median  Household Income: $45,043 (36th)
Like most of the states in the Northern Midwest, South Dakota has been a haven of employment in a country which has otherwise been plagued by joblessness. With a low unemployment rate of 4.5%, the home of Mount Rushmore is second only to its name-sharing neighbor to the north. Unfortunately, it falls about average in most other categories, aside from having one of the highest rates of obesity in the country.

Debt per Capita: $14,260 (50th)
Unemployment Rate: 7.7% (18th)
Home Price Change (’06 – ’09): 9.2% (20th)
Median  Household Income: $66,953 (4th)
While maintaining an above average overall ranking on our list, Alaska has a number of metrics for which its rank is an extreme. The Great Land has the second lowest percentage of population below the poverty line, the third highest percentage of people over 25 who have graduated from high school, and the fourth highest median income per household.  At the same time, however, tit has the third highest percentage of residents without health insurance and the absolute highest debt per capita, $14,260. 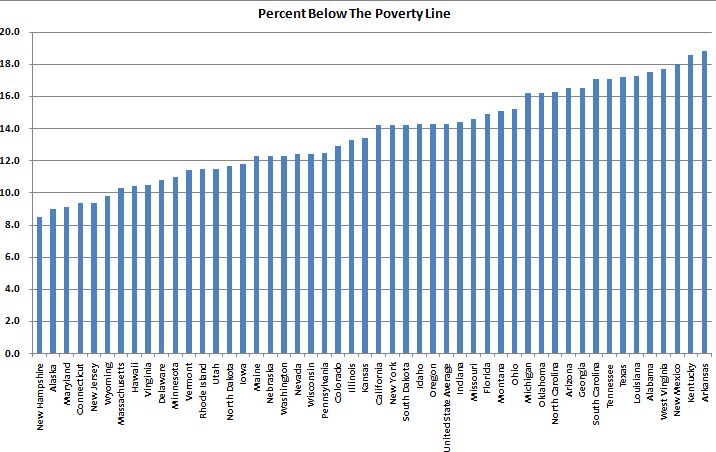 (September, 2010): From the Census Bureau’s American Community Survey for 2009, The percent of the population considered to be below the national poverty line at some point in the past 12 months.
15th. Washington

Kansas is noteworthy for the fact that is unremarkable. The state ranks seventh in unemployment, with a rate of 6.6%.  Aside from this, the state has fairly mediocre rankings across the board.

The state, known for its lobsters and rocky shores, ranks tenth in high school completion. “Vacationland,” as it’s called, also happens to have the lowest violent crime rate in the country, with only 119 violent crimes committed per 100,000 people. It ranks in the middle for most other categories, however the state ranks a meager 40th in GDP per capita.

Wisconsin is average with regards to most of the measurements used in our ranking, failing to surpass 20th place for GDP per capita, percent of population below the poverty line, median household income, or debt per capita.  It does, however, stand out with the seventh highest rate for insurance coverage for its residents – only 9.4% are not covered.

Debt per Capita: $14,079 (49th)
Unemployment Rate: 8.8% (26th)
Home Price Change (’06 – ’09): -8.6% (44th)
Median Household Income: $64,081 (6th)
Massachusetts is a good example of a state which falls towards the median range of our ranking, not because it is either high or low in its metrics overall, but because it does very well by some measurements and very poorly by others. It is third in GDP per capita, seventh in poverty level, sixth in median household income, and, at 4.2%, has the smallest percentage of its residents without health care coverage. On the other hand, it is 49th in debt per capita, at $14,079 for each citizen, and it had the sixth-worst decline in home value from 2006 to 2009. 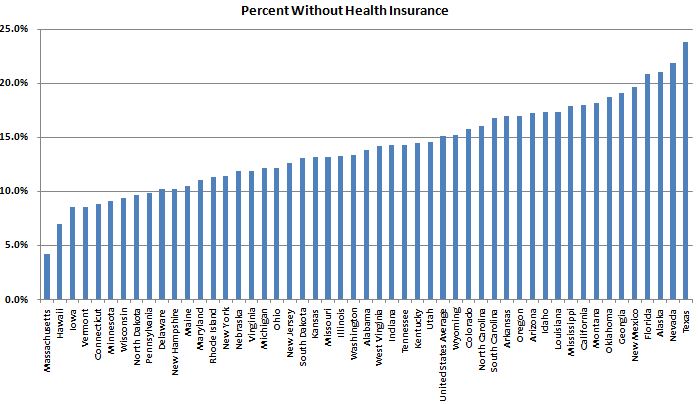 (September, 2010):  From the U.S. Census bureau’s American community Survey. The Percent of the population without health care, civilian, not committed to institutions.

Debt per Capita: $10,457 (46th)
Unemployment Rate: 9.1% (30th)
Home Price Change (’06 – ’09): -2.6% (40th)
Median Household Income: $67,034 (3rd)
Connecticut, often noted as a state with many affluent communities, excels in a number of areas related to wealth.  The state has the fourth smallest population below the poverty line and ranks third for highest median household income.  However, they rank 46th in debt per capita, at $10,457.
Read more: Investing, Analyst Upgrades, Research
Get Our Free Investment Newsletter