Debt per Capita: $7,666 (29th)
Unemployment Rate: 11.7% (46th)
Home Price Change (’06 – ’09): -20.9% (48th)
Median Household Income: $44,736 (38th)
Despite receiving the ninth-lowest rank, Florida maintains an amazing AAA rating from S&P, which is the only reason it didn’t rank as the worst state on our list. From 2006 to 2009, property values in the sunshine state dropped 20.9%, making it the third-worst in that category. Despite its significant number of older residents, Florida also ranks 47th in health insurance coverage and has the fourth-worst violent crime rate. 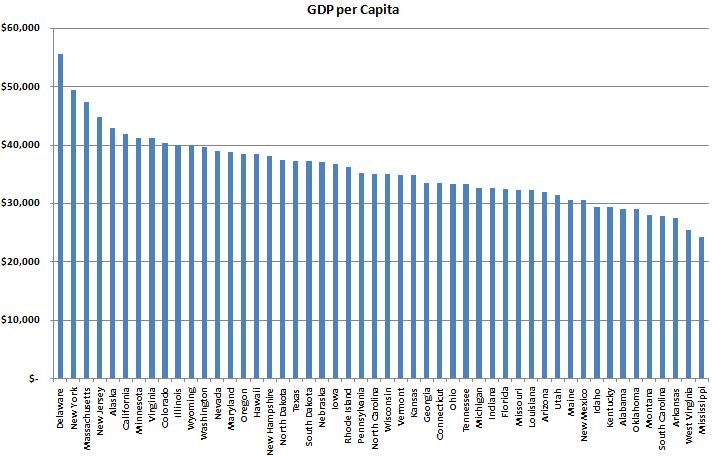 Debt per Capita: $7,098 (24th)
Unemployment Rate: 7.6% (17th)
Home Price Change (’06 – ’09): 18% (3rd)
Median Household Income: $42,492 (41st)
While Louisiana ranks in the bottom 20% of states for most of the categories considered, including violent crime rate, percentage of people below the poverty rate, percentage of people 25 years and older who have completed high school, and median household income, the state remains an attractive place for many people to live.  It ranks third for occupied home value, boasting an increase of 18% between 2006 and 2009.
47th. Michigan

Debt per Capita: $9,228 (39th)
Unemployment Rate: 12.4% (48th)
Home Price Change (’06 – ’09): -28.3% (49th)
Median Household Income: $58,931 (9th)
While it does not quite rank as the worst state on our list, California stands out as being among the most poorly governed. The most populous state in the union has been mired in debt and political unrest for nearly a decade. It bears the unique honor of being the only state considered economically unstable enough to have its debts, at a record $341 billion, rated at an A- by S&P. It ranks 42nd in the country in health insurance coverage, despite having a state-sponsored health insurance program. The golden state also ranks 48th in high school completion. Between 2006 and 2009, California experienced the second worst household value decline, with occupied homes losing an average of nearly 30% percent of their value.
50th. Kentucky

24/7 Wall St. considered data from a number of sources, including Standard & Poor’s, the Bureau of Labor and Statistics, the National Conference of State Legislators, the Bureau of Economic Analysis, and the National Association of State Budget Officers.  The Bureau of Labor Statistics provided unemployment data, and the Bureau of Economic Analysis provided GDP per capita. Credit rating agency Standard & Poor’s provided credit ratings for all 50 states. A significant amount of the  data we used came from the U.S. Census Bureau’s American Community Survey. Data from ACS included violent crime rate, unemployment rate, GDP per capita, percent below the poverty line, high school completion for those 25 and older, median household income, debt per capita, percent of the population without health insurance, and the change in occupied home values from 2006 to 2009.  The ACS released its 2009 numbers on Tuesday, September 28th, 2010. These are the values we used in our survey.  Once we reviewed the sources and compiled the final metrics, we ranked each state based on its performance in all the categories.