The second most populous state in the nation, Texas scores fairly average in most categories.  There are, however, two areas where Texas places dead last. The Lone Star State has the lowest percentage of its twenty-five and older population with a high school diploma – one in every five fails to obtain a high school education. Also, 23.8% of its population does not have health insurance, the worst rate in the country.

Occupied home values increased 14% from 2006 to 2009, putting the state in sixth place for this category. This anomaly, however, has little to do with the health of the state’s economy or living conditions. Ranked 47th in the category, 18% of New Mexico’s population is below the poverty line. It also has the sixth-worst violent crime rate, with 656 violent crimes per 100,000 people. 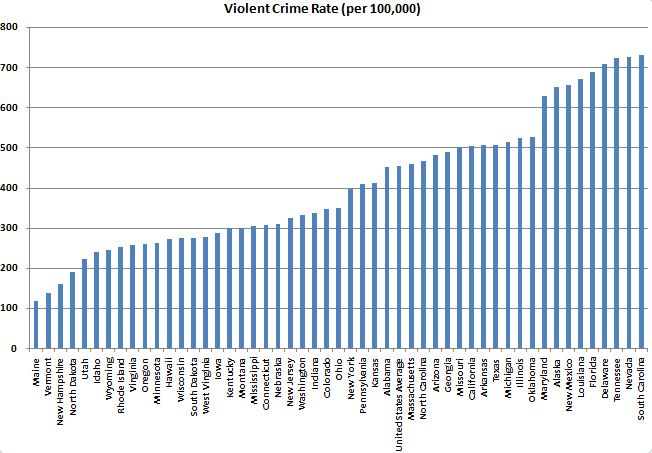 From the U.S. Department of Justice

Debt per Capita: $5,948 (13th)
Unemployment Rate: 9.2% (31st)
Home Price Change (’06 – ’09): 11.8% (13th)
Median Household Income: $40,489 (46th)
For a state so far down in our ranking, Alabama does surprisingly well in many categories, making the top fifteen in debt per capita and increase in home value. The reason it falls so far down the list is the intense poverty that plagues the state. It ranks 46th in median household income, and there are several counties in the state which have more than 30% of the population below the poverty line. Only one county in Alabama has a poverty rate in the single-digits.
40th. Arkansas