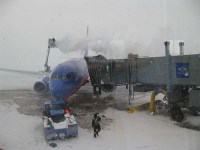 The month of December was not so hot for international air carriers. According to the International Air Transport Association (IATA), air traffic demand growth fell by -2.3% month-over-month, from 8.2% growth in November to 4.9% growth in December, with about -1% of the drop attributable to severe weather in Europe and North America. Going forward, though, the major concern is fuel prices, which are rising fast.

But first, the weather, which is continuing to play havoc with air travel into February, as a majestic winter storm is pounding the US from Nebraska to Maine, forcing the cancellation of more than 3,900 flights so far today. More than 20% of US flights were canceled yesterday.

Add to canceled flights the rising cost of jet fuel, and the airlines could be struggling for a while yet. Airline fare-comparison website farecompare.com reports that American Airlines, owned by AMR Corp. (NYSE: AMR), raised its roundtrip fuel surcharge by $4-$10 on most of its domestic routes, and United Continental Holdings (NYSE: UAL) added a $6 roundtrip fuel charge to a “significant number” of its domestic routes.

JetBlue Airways Corp. (NASDAQ: JBLU) added a fuel surcharge to flights from the US to Puerto Rico and other Caribbean destinations of $70-$90 roundtrip, while American boosted prices on flights to Hawaii and Canada. US Airways Group, Inc. (NYSE: LCC) and Alaska Air Group, Inc. (NYSE: ALK) have matched American’s hikes on some routes, and Delta Air Lines Inc. (NYSE: DAL) has matched fares on “a smattering” of routes. Southwest Airlines Co. (NYSE: LUV), AirTran Holdings Inc. (NYSE:AAI), and Frontier Airlines, a subsidiary of Republic Airways Holdings Inc. (NASDAQ: RJET) have not raised fares yet.

The IATA report notes a sharp rise in oil prices in December, and is waffling on its earlier prediction that 2011 would be a second consecutive year of profitability for the airlines, even though profits would fall from about $12.7 billion to $9.1 billion. The estimate was based on an oil price of $84/barrel. That price may turn out to have been wishful thinking.

Every $1/barrel rise in the price of oil translates to an additional $1.6 billion in costs for the airlines, according to the IATA. At about $91/barrel for WTI, airline costs will rise by $11.2 billion, essentially wiping out the predicted $9.1 billion in 2011 profits. Unless the airlines raise ticket prices or add more fuel surcharges. Of course either of those price actions could lower passenger numbers, making the profit outlook for airlines even dimmer in 2011.

For now, it seems that many of the major US carriers are cautiously adding modest surcharges or raising fares slightly to stay ahead of rising oil prices. If prices decline, the air carriers may leave the hikes in place for a while to try to make up some lost profits. If oil prices continue to rise, the fares and fuel surcharges will have to rise too, but not too much.

The weather will change, and so will the price of oil. One will get better and the other is likely to get worse. The short-term weather effects won’t help US air carriers, but the long-term effects of rising oil prices are significantly worse.