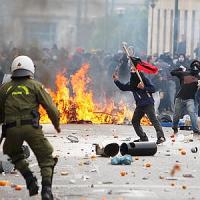 The origins of Memorial Day date to the aftermath of the Civil War when people would decorate the graves of fallen soldiers to honor their service.  Though the holiday still retains its reverential and patriotic spirit, its economic consequences, though smaller than other holidays, cannot be overlooked.

Memorial Day is the unofficial start of summer. Tourists will begin to flock en masse to resort communities such as the Jersey Shore — the real place not the awful reality show–, Cape Cod, Mass. and the Outer Banks of North Carolina thpat rely on traffic from visitors who drive.  Many people will be able to better afford to fill up their gas tanks thanks to the recent flattening in gas prices.  Americans will also be taking the covers off their barbecues that have protected them since the first frost.  They will be firing them up to cook burgers and hotdogs  for their family and friends. These seemingly mundane details of modern American life will be of keen interest to investors who are always eager to figure out which direction the economy is headed.

As Bill Martin, the founder of ShopperTrak, which tracks store traffic-based information and shopper conversion analytics , points out, a strong Memorial Day may “bode well” for larger holidays later in the year such as the Fourth of July.  Gasoline prices are going to affect consumer behavior this weekend though their impact varies and from an economic point of view may not be all bad. “The ShopperTrak Total US Traffic Index projects that shopper visits to stores and malls over the four day weekend will be down 1.6% compared to Memorial Day weekend in 2010,” ShopperTrak says. ” ShopperTrak notes that with gasoline prices up over one dollar per gallon from May 2010, consumers are more efficient with their shopping trips.”

One of the topics of endless debate on Wall Street is over consumer sentiment.  The reason is simple:  Happy consumers buy more goods and services than worried ones.  Consumer spending is thought to equal more than 70% of Gross Domestic Product.  Though some economists argue that the figure is misleading, it remains one of the most closely watched of all financial metrics on Wall Street.  Lately, consumers have been feeling pretty good despite high prices for gas and food.   In fact, consumer confidence rose more than expected in May, according to The Thomson Reuters/University of Michigan preliminary consumer sentiment index. Pundits, however, remain concerned.

24/7 Wall St. decided to take a closer look at the economic consequences of Memorial Day.  To be clear,  it is not in the same league as the December holidays, which generated about $450 billion in sales last year.  Indeed, retailers are not counting on Memorial Day to balance their books like they do for the winter holidays.  The success or failure of the holiday for businesses will not affect GDP growth.  It is a useful barometer, however, since it is a focal point for so many different industries.

That being said, Memorial Day does have economic consequences. For one thing, Memorial Day is a federal holiday.  Government offices are closed.  The federal budget accounts for holidays, which run the equivalent of $500 million and $700 million depending on whether the U.S. Postal Service is included, according to the National Taxpayers Union (NTU).

“Now, a case can be made that the `cost’  of a day’s pay should not be added to the total, since the government would pay people for that day whether it was a holiday or not,” writes Pete Sepp, NTU spokesman,  in an email. “Others would argue that taxpayers shelled out for an extra day from which they got no work. In the case of Memorial Day, well, as I noted, there’s not an EXTRA cost to taxpayers because this was already planned for. Whether folks believe that there are too many federal holidays, or whether federal employees are over-compensated, those are different questions entirely.”

1. Retail Sales: Most experts expect retail sales to show a modest gain of about 3% this year.  Most chains posted modest first quarter profits which failed to wow Wall Street.  ShopperTrak estimates that sales at bricks-and-mortar stores (excluding gasoline and food) will be $14.8 billion, up 4.2% from the previous year.  Last year, sales during the holiday soared 7.6% and in 2009 they fell 5.7%.  Online merchants such as Amazon.com Inc. (NASDAQ:AMZN) are touting their Memorial Deals as well.

2. Car Sales:  Sellers of new and used vehicles have always thrown plenty of promotional muscle behind their Memorial Day sales. This year, however, the stakes are higher. “While many motorists will be hitting the road on vacation, this Memorial Day weekend, it’s also a great time to buy a new car,” according to Consumer Reports. “There are a number of discounts available, and dealers may be more willing to negotiate since it’s also the end of the month and they want to meet their quotas. ”  J.D. Power expects nearly 13 million vehicles to be sold in the U.S. in 2011, up 7% from 2010.

3. Gasoline Sales:  The summer driving season is coming just as gasoline prices have dropped from a high of $3.97 a gallon to $3.84.  Consumers don’t appear to be fazed in the least.  AAA is forecasting that 34.9 million Americans will travel 50 miles or more from home during the four-day Memorial Day weekend, up 0.2% from a year ago.  The Energy Information Administration projects annual average gasoline prices will be $3.63 per gallon in 2011.  Clearly, things could be much worse.

“Considering the other positive economic factors, the expectation is that the effect of rising gas prices will counteract any benefit from a slow but steadily improving outlook,” the AAA forecast says.  “That is supported by the expectations of travelers for this holiday, who see fuel costs taking up a higher percentage of their expected holiday spend, although when asked specifically if rising  gas prices will impact their plans to travel this year, more than half said it will not negatively impact them.”

4. Tourism: Indeed, officials in tourist towns in New Jersey,  Massachusetts and North Carolina, which rely heavily on travelers arriving by vehicle, recently told 24/7 Wall St. that they were expecting better summer seasons than last year.   Families, buoyed by improved results from the stock market, were willing to take vacations that are within driving distances from their homes.  High gas prices don’t appear to be as much of a factor as some might expect. “Some people are not ready to fly. The road trip is back,” says Diane Wieland, the head of the Cape May County, New Jersey Department of Tourism, said in an interview.  Key to a successful summer for the $817 billion travel industry will be tourists from outside the United States who may be enticed by the cheap dollar. The U.S. Travel Association expects that 61.8 million overseas visitors will come to the U.S. this year, the biggest number since at 2007.

5. Meat:  To the meat industry, the start of the “grilling season” is its  answer to the December holidays.  Sales have struggled lately as Americans continue to eat less meat.  Tyson Foods Inc. recently complained that cold, wet weather depressed meat sales because fewer people wanted to use their outdoor barbecues. ‘Demand feels pretty good for two weeks after Easter, but not hardly where we wanted it to be two weeks before Memorial Day,”  said CEO Chief Executive Donnie Smith said in a recent speech to an industry conference. “We have started increasing prices since the first part of the year and we will probably continue to do so.”

Americans eat 83.8 pounds per capita of chicken,the most of any meat.  The USDA says Americans capita consumption of beef ranks second, at 60.1 pounds, according to USDA.   Beef consumption has been moving downward since the 1970s while chicken consumption has soared.  “In 2007, meat and poultry expenditures accounted for 1.7 percent of disposable income per capita, and for 29.7 percent of total food expenditures,” according to the American Meat Institute. “This figure has remained relatively steady in recent years.”

6. Grills/Outdoor Furniture:   Memorial Day is a key holiday for companies that make barbecues and outdoor furniture, which are a combined $5 billion industries.   The American Hearth, Patio and Barbecue Association (AHPBA) expects both industries to do as well in 2011  as last year if not better.  In 2010, more than 15 million grills and smokers shipped in North America,  up 0.5% from 2009, the association says.   Most grills are replaced every two years, so people attending a barbecue this weekend may be inspired to buy a new one of their own. “People love spending money on the comforts of home,” says Leslier Wheeler, an association spokeswoman.  Grill sales are expected to rise 10.7% through 2015.   Imports of outdoor furniture  totaled $2.33 billion last year, up 16.9% from 2009 figures of $1.99 billion, according to research published in Casual Living magazine.