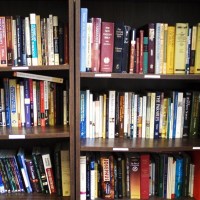 Sometimes a death of a brand can take quite a bit longer than many might expect.  Borders Group was one of our brands to disappear picks in late-2010 despite a broad and obvious economic recovery.  The challenges were just too numerous.  Now the company is in the process of a liquidation, signaling the true death of a brand.  Amazon.com Inc. (NASDAQ: AMZN) was perhaps the biggest disruption of the last decade, but then the move to electronic books sealed the fate of Borders.

What is interesting is that investors are generally considering Barnes & Noble, Inc. (NYSE: BKS) as the only winner in this matter.  Shares are up another 2.5% today at $17.67, but the stock was down at almost $17.00 during Monday’s lows.  Now that Borders is toast, this means more brick and mortar bookstore buyers can still head the way of Barnes & Noble stores to buy books, newspapers, calendars, and other items.  Barnes & Noble still has a market cap of only $1 billion and it is obvious that the outfit does not want to get into that buyout that was around from John Malone.  B&N operates over 1,300 retail stores if you count campuses and its fiscal-2011 sales were roughly $7 billion.

There may actually be another winner that has gone largely overlooked and maybe even unloved.  Books-A-Million Inc. (NASDAQ: BAMM) is a mere $49 million company based in Birmingham, Alabama.  It now operates over 200 sores in 23 states and in D.C. and has been considered the third largest book retailer in America.  Books-A-Million’s sales have been in decline and the most recent year (January 2011) saw sales of roughly $495 million, but it has still managed to remain profitable in each of the last three fiscal years.  It is small enough that it actually has no large firms covering the stock but the earnings for each of the last three years (most recent first) is here: $8.9 million, $13.3 million, and $10.5 million.

Books-A-Million shares are actually about flat today at $3.09 and the 52-week trading range is $3.00 to $7.07.  The stock only trades about 76,000 shares per day.  Our only question is whether or not the company is actually too small to even get noticed.

The real question that will arise is which retail locations actually did well in the Borders’ network.  Some were not losing money and there may be an opportunity for the bookstore rivals to open locations that had failed.

We would note that while Amazon is an obvious winner, this is now just a line-item for a company of its size.