Wall St. Compensation Back in the Spotlight 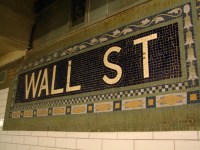 The office of New York State Comptroller Thomas P. DiNapoli released its annual report on the state of Wall St. The focus of the report, at least according to the press, was this information:

The average salary (including bonuses) paid to securities industry employees in New York City fell sharply in 2009, but rose by 16 percent in 2010 and by another 0.5 percent in 2011 to reach $362,950. This was a higher average than before the financial crisis and was the highest average among New York City’s major industries. The disparity between the average salary in the securities industry and the rest of New York City’s private sector narrowed slightly but it remains wide at 5.3 times greater than the rest of the private sector ($67,900).

The data will reopen the argument about why investment professionals should be compensated more than teachers, firemen, the police or, for that matter, any other productive American who works in a job that adds to the tax base and gross domestic product. The argument is about why an industry that was bailed out by taxpayers at the risk of hundreds of billions of dollars should be allowed to pay its employees so well. But those same issues have surfaced frequently for years, and, except for the two years of the financial crisis, nothing has changed.