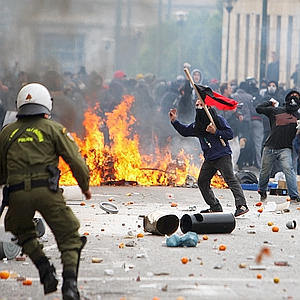 Being an investor in emerging markets is supposed to come with great growth opportunities as the local populations begin the purchase and consumption of more and more goods and services outside of just food, clothing, and shelter. The rise of Arab Spring interrupted much of the growth phase that may have taken otherwise place as capital fled rather than sought these emerging markets and frontier markets. Now it is feeling more and more as if the protesting around the planet is invading emerging market nations to the point that investors are fleeing.

The concern of 24/7 Wall St. is that with the United States being the only relatively stable major global economy at the moment, there is a growing risk that investors are just going to keep their money at home. We are seeing more and more flushing out of the emerging market ETFs.

And what happens when investors worry that China’s growth is only dependent upon the U.S. and on Chinese government support? And what about the meteoric rise, followed by a major tank into a bear market in Japanese stocks?

iShares MSCI Emerging Markets Index (NYSE: EEM) closed down 3.1% at $38.61 against a 52-week range of $36.88 to $45.33. Volume reached a whopping 106 million shares on Wednesday in New York trading. We also saw a continued move out of emerging market bonds, with the iShares JPMorgan USD Emerging Markets Bond (NYSE: EMB) ETF closing down 1.17% at $110.47 against a 52-week range of $109.50 to $124.43. Both of these should be of serious concern to investors because these are broad measurements of emerging markets as a whole. The main issue started out over a hike in bus fares, but this now includes government corruption and spending.

Market Vectors Egypt Index ETF (NYSE: EGPT) is back to where it was in the Arab Spring as it seems that getting rid of the former regime has done little good. Surprise, surprise. This ETF may still trade more like a closed-end fund but we will leave that interpretation up to each investor. Shares closed down 2.6% at $9.53 on Wednesday against a 52-week range of $9.23 to $15.99.

Today is an example of how there is yet again no free lunch. Emerging markets are coming with more and more political risk as social unrest is not viewed positively by outside investors. That being said, emerging market fund manager Mark Mobius is known for saying “invest when there is blood in the streets.”