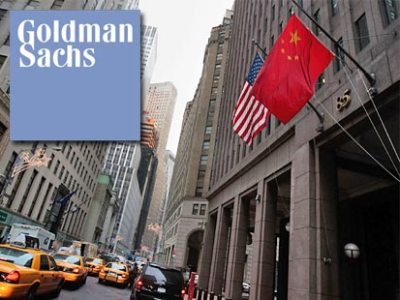 Source: GS.COM
It is that time of year when investors start positioning their portfolios for the year ahead. 24/7 Wall St. reviews vast numbers of research reports looking for the best stocks to buy and stocks to sell, according to analysts. If one firm can move the needle handily in any individual stock it is Goldman Sachs. Investors have followed the firm’s prized Conviction Buy List for years, and the firm has made many changes to this key list going into 2014.

When investors see stocks upgraded from Neutral to the Conviction buy List, they usually chase shares as stocks to buy. When they see the stocks removed, they often treat the names as stocks to sell, even if Goldman Sachs did not remove its formal Buy rating. What investors need to consider is that Goldman Sachs only targets institutional investors and very high net worth individuals.

Investors are generally positive for stocks for 2014, they expect the beginning of the end for quantitative easing and the endless bond buying, and they seem to even expect a gradual recovery for the rest of the world in 2014. Goldman Sachs issued an upside call to 1,900 for the S&P 500 in 2014, but they also believe a 10% correction is likely to occur before that comes about. The many changes to the Conviction Buy List echo this outlook, and many investors actually might welcome lower prices to get into long-term stocks again.

The raw number of changes has been vast in recent days and weeks. In the first week of December, there were Conviction Buy List changes made each day of the week. That is highly unusual, and we have interpreted this as the firm telegraphing to its wealthy clients to completely reposition their portfolios for the year ahead.

Some of the top stocks on the Conviction Buy List have been removed and other new names of highly visible companies have been added. Again, we are interpreting this as a signal that the wealthy investors at Goldman Sachs are being told to reposition their portfolios for 2014.

We have tracked more than a dozen changes to the Conviction Buy List over recent weeks. If that is not a signal of a rebalancing for what the wealthy are supposed to do with their money, then what is?

Dollar General Corp. (NYSE: DG) is a store that most Goldman Sachs clients would never visit. Still money is money, and this call echoes our own belief that the dollar store theme is a secular winner for investors. Goldman Sachs raised the king of dollar stores to the Conviction Buy List on Friday, December 6. Unlike others where there was already a Buy rating, this one was raised up from a Neutral rating. The firm also raised its price target to $71 from $64, and the consensus price target is closer to $64, while the highest analyst price target is only $1 higher than the Goldman Sachs target.

MGIC Investment Corp. (NYSE: MTG) made the move to the Conviction Buy List on December 5, with a $10 price target. The company is benefiting from a solid improvement in credit and mortgage quality. With shares close to $8.40 now, the consensus price target is $8.81 and the 52-week trading range is $1.92 to $8.59. We noticed that the $10 price target is well under the street-high target of $13 on this stock.

Melco Crown Entertainment Ltd. (NASDAQ: MPEL) was removed for the Conviction Buy List on December 5, but the Macau casino operator retains a Buy rating. Solid earnings and revenues have helped drive the stock, and we could not help but notice that the casino sector valuations were looking very high going into 2014 from most other firms as well. Despite removing it from the list, Goldman Sachs actually raised their price target on the stock to $43 from $34. The consensus price target is closer to $40 here.

Tiffany & Co. (NYSE: TIF) is a company that most of Goldman Sachs’ clients visit annually, if not more. The luxury jeweler was added on December 5 to the Conviction Buy List, having been raised up from Neutral in the call. The firm took the price target up to $105 from $97 as well. Tiffany’s current share price is closer to $89, and the consensus price target is near $88.50, despite the company having raised its guidance. Again, Goldman Sachs has the highest price target on Wall Street.