How Barron's Drove the DJIA to All-Time Highs on Monday 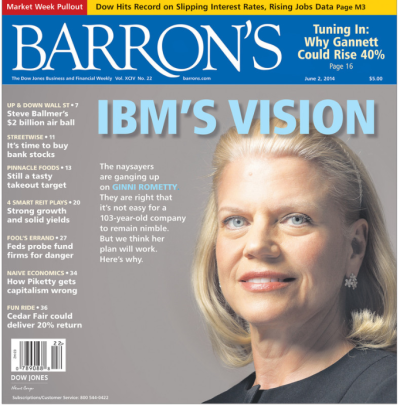 Source: Barrons.com
This past weekend’s edition of Barron’s may be solely responsible for driving the Dow Jones Industrial Average (DJIA) to new highs on Monday. The Dow hit a new high of 16,746.81. The reason that Barron’s may have driven the DJIA higher is that the mid-day snapshot shows that International Business Machines Corp. (NYSE: IBM) was portrayed as a counter-take article on a down-and-out turnaround that is unloved but that may actually get back on its feet.

We still view IBM as a value trap, but having IBM as the cover story on Barron’s is going to trump any one-day opinion we have on the matter.

What investors have to consider here is that the DJIA is a price-weighted index based solely on a stock’s share price. The S&P counts shares based on an adjusted free-float of the shares that make up the market cap. So, IBM with a $187 billion market cap, is worth less than GE’s $268 billion market cap on the S&P 500 Index. But on the DJIA, IBM’s index weighting is worth almost seven times that of GE because of a $185 share price handle rather than a $26 stock handle.

Another drag was Goldman Sachs Group Inc. (NYSE: GS) with its almost $1.00 drop to $158.85. It must be that no one liked its disclosure on alternative trading results and volume.

The only other major boost to the DJIA from its high-priced stocks was from $1.18 gain in Caterpillar Inc. (NYSE: CAT) to $103.41. Even Chevron Corp. (NYSE: CVX) and Exxon Mobil Corp. (NYSE: XOM) were negative on Monday in midday trading, and both of those have a higher weighting than most DJIA stocks with share prices above $100.

To prove a point: 16 of the 30 DIJA stocks were negative or flat on the trading day. Of course half of the components would seem to be up or down on any given trading day, but that doesn’t exactly sound like a great enough driver to take the DJIA to a new all-time high.

Investors who made their bets on the DJIA on Monday seem to have nothing more than Barron’s to thank for their gains. Another point of reference is that the S&P 500 was down by less than 0.1%.

SEE ALSO: Why IBM Remains More of a Value Trap