The company’s CEO, Doug McMillon, told Bloomberg TV Tuesday morning that Wal-Mart is exploring “doing good things for the world.” Describing the company as a retailer, he explained that it also looks for opportunities to “make a positive difference.” Referring to things like wage increases and environmental sustainability, he said, “We do not want to sell anything that offends people. When we saw that [Confederate flag-themed goods] were out there, we decided to discontinue.”

If you type the words “Confederate flag” into the site’s search box, you likely will get about 50 pages of results, as we did. None of the results that we checked demonstrated that Wal-Mart was itself selling any items with a Confederate battle flag theme (not counting the Mississippi state flag of course).

ALSO READ: Should Facebook Already Be Worth More Than Wal-Mart?

However, Confederate flags are still advertised on Walmart.com. At the bottom of search result pages is a box with sponsored links powered by Google’s Adwords and the YPN Program, a partnership between Yahoo! and Bing. In nearly every search we did, most of the links were for retailers promoting Confederate flags. Here is what it looked like this morning: 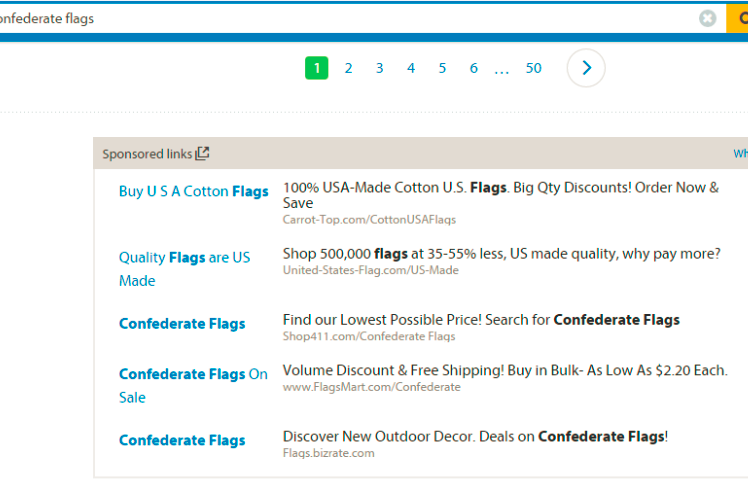 We spoke to Bart Boughton, founder of 360Ops, a company that provides services and technology for online publishers. He told us that blocking ads can be accomplished relatively easily either by category or keyword — something AdSense and YPN should both be able to handle. Boughton also said that the most effective way to block an advertisement is at the link level, blocking the URL that the ad links to.

“Companies are pretty reactive in these situations,” he said. That is, companies wait for the complaints to start rolling in before they take any action.